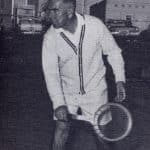 SSC’s minor sports flourished more than the football teams in the 1960s. SSC competed in nine intercollegiate sports for men and three for women. The athletic program was the most balanced and often the best in the Arkansas Intercollegiate Conference (AIC). It won its first AIC All-Sports trophy for the best combined record of its teams in 1968 and took four straight titles from 1971 through 1974. The men’s tennis team under volunteer coach Victor Sheshunoff, Magnolia’s Russian émigré businessman, took the 1961 AIC title behind John Wesson’s strong performance. The golf team’s best player, David Waddle, led it to a 1965 AIC championship. Coach Delwin Ross’s baseball players took the 1967 District 17 NAIA title. When Coach Bobby “Cotton” Staten took over the team, it won an AIC co-championship in 1968 and was the sole titleholder in 1969.

The most successful minor sports team was track and field. Raymond “Rip” Powell returned to his alma mater in 1963–64 and took the team to the first of several AIC track titles in 1967. In various meets, speedsters George Eriquezzo from Danbury, Connecticut, and Texan Jackie Seale ran 9.5-hundred-yard dashes. The team of Eriquezzo, Seale, Phil Trotter from Arkansas, and Dan Veach from South Hampton, Pennsylvania, set records in the 440-and 880-yard relays.

Powell was the first SSC coach to recruit African American athletes. After the team integrated in 1966–67, Archie Walker, one of SSC’s first black sports stars, joined Seale, Trotter, and Veach to set more records as did another black runner, Elgin Stokes, who ran a 440-yard dash in 48.3 seconds. These runners gained NAIA all-American honors during several seasons. Jackie Seale joined the Southern Arkansas Athletic Hall of Fame in 2007. SSC athletic teams with black players sometimes encountered denial of service at restaurants when competing in Louisiana and Mississippi, and coaches learned to check first and to take sack lunches to eat on the bus when traveling to those locales. Dan Veach, Archie Walker, and several other players late one night went to the 66-Kitchen café, a favorite Magnolia hangout of students because it was open twenty-four hours a day. When a waitress met them at the door and said Walker could not come in, Veach replied,“You must be joking,” and walked in, the others following. Veach later recalled that he and the trackmen did not set out to integrate the restaurant. They did so without thinking. Nothing more was said to the athletes who were served their hamburgers without incident. 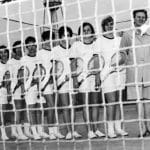 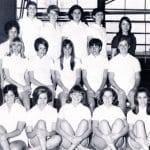 Women’s intercollegiate athletic competition was restored in spring 1965 when Dr. Bruce agreed to let Dr. Kathryn Brown take an intramural basketball team to play in the state’s Amateur Athletic Union’s tournament. Subsequently, Brown’s tennis teams took state titles in 1967 and 1968 with the skilled play of Joyce Crawford and Vicki LeFevers, and Brown’s bowling team were champions in 1966–67. Women swimmers relied on the great diving of Kathy Belmont and the swimming of Edith Frazier to become state champions in 1967–68 and 1969–70. The men’s swim teams seldom had a full roster, so in 1969, the men’s team took Edith Frazier with them to a meet at Henderson State College. She bested all the males in the one-hundred-yard freestyle and the two-hundred-yard butterfly. Afterward, AIC authorities ruled that Frazier would no longer be allowed to compete in men’s swim meets. 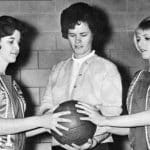 The women’s basketball coach was Dr. Margaret Downing, whose teams would win the second-most championships, men’s or  women’s, in school history. She came to SSC in 1965–66 to coach basketball but sometimes coached swimming and volleyball teams as well. Her first Riderette basketball team, whose outstanding player was Phyllis Landes, won the state’s Amateur Athletic Union title in 1966. A national leader in the rise of women’s intercollegiate basketball, Downing was SSC’s best-known coach in Arkansas and across the nation. She was president of the National Girls Basketball League in 1963–64, led in creating the Arkansas Women’s Intercollegiate Sports Association (AWISA), and served as chair of the U.S. Olympic Women’s Basketball Committee. She managed the U.S. women’s teams at World and Pan-American tournaments in 1967-68 and 1971. Over the course of an eighteen-year coaching career at SSC and Southern Arkansas University, Downing’s teams would win eight conference and state titles. She was inducted into the NAIA Hall of Fame in 1987.

SSC athletics perhaps did as much to promote integration as any other single college activity. The greatest campus heroes of this era, Bill Barnes and Al Flanigan, were black athletes. Flanigan and Barnes, together with Johnny White, formed a winning combination that took Coach Watson’s basketball team to another AIC championship as well as a District 17 NAIA title in 1971. The five-foot-eleven-inch Flanigan was a playmaker guard whose great outside shooting led scoring through much of the season. Barnes dominated the boards and matched Flanigan almost point for point. It was a thrilling cliff-hanger year, for the AIC title lead switched time and again. SSC’s gymnasium was packed at every home game, and many Magnolians followed the team on road games. Not since the days of Elmer Smith had local people been so excited about SSC athletes. The basketball team finally sealed the title on February 23 with a home game victory, 59–58, over Henderson State before an overflow crowd of three thousand. That year, both Barnes and Flanigan were all-AIC first team selections, and the Memphis Pros (later the New Orleans/Utah Jazz) drafted Barnes. Injuries prevented his playing. Both men were named in 2006 to the SAU Sports Hall of Fame. The Mulerider Club of local boasters, which had declined over the years, was revived by basketball and improved football in 1971–72.

The football team also had outstanding black players in the early 1970s. Auburn Smith stepped aside from football coaching in 1969 to take the posts of athletic director and financial aid director where the lifelong bachelor often anonymously used his own money to keep students in school. Rip Powell became Mulerider head coach. With assistants Calvin Neal and James “Sonny” Whittington, Coach Powell compiled the best football record in school history from 1971 to 1974, won SSC’s first AIC football title in twenty years, and took teams to national rankings on several occasions. Powell was a tough, physical coach, and like those who played for Elmer Smith, players who stuck with him loved the man. 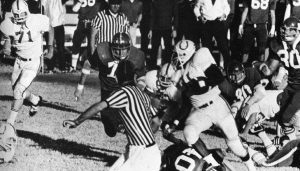 Cleo House carried the ball in 1973 (Click photo to enlarge)

When the coach moved Cleo House from defensive end to fullback in 1971, House joined backs Cornell Williams and Roy McLemore to run behind freshman quarterback Steve Lamb. The 1971 team had a 9–2 record, the best since 1952, and but for Arkansas Tech, the Muleriders would have become AIC champions. In 1972, SSC pushed aside top-ranked Tech with a convincing 21–3 victory and took that year’s NAIA rushing record as well. A co-AIC championship (shared with Harding) was sealed by a 43–0 romp over SSC’s oldest rival at Monticello. House ran for 147 yards and Williams for 177. House, who was an NAIA all-American pick, signed as a free agent with the Miami Dolphins, the first footballer in school history picked up by a major team. Unfortunately, he never got to play.

Coach Powell never again won an AIC title, but he had more great teams and players including Don Hawkins (1974–77) who set numerous school rushing records and was SAU’s first NAIA first team all-American in 1977. Hawkins was named to the SAU Sports Hall of Fame in 2006. 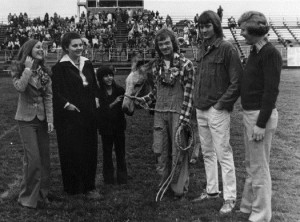 Coach Powell’s great 1972 team’s victories would not be attributed to the magic of Optimaggie as had those of Elmer Smith’s Muleriders in 1950. Optimaggie had passed away in 1970. Less attention had always been paid to his son, Adolphus, who was infrequently brought to games. At homecoming in 1972, the cheerleaders of Ouachita Baptist University brought Adolphus from his farm corral to the football field to parade the mule at halftime, much to the embarrassment of SSC. Adding insult after the game, Ouachita students “mulenapped” Adolphus and kept him for three days in Arkadelphia.

Eddie Parham, who wrote a prize-winning column for the Bray and was a cheerleader in 1974, brought Adolphus out of retirement and sought to reignite the school spirit of the 1950s. He pointed out that Adolphus was getting old and needed a successor. He served as a co-conspirator with Mary Ann Peace and other Phi Beta Lambda leaders to substitute Adolphus when their gift of a successor mule did not arrive in time for presentation at the 1974 homecoming’s halftime ceremonies. Few in the crowd caught on to this substitution. The mule Phi Beta Lambda had purchased arrived later. The students named their gift mule Imonaggie, a play on Dr. Bruce’s first name. Parham was dropped as a cheerleader in 1975 probably because he persisted in wearing torn farm overalls as homage to the school’s early history rather than a regular cheerleading uniform.

During the early 1970s, the minor men’s sports continued to flourish. Monroe Ingram, who joined Watson as assistant basketball coach in 1970, knew little about baseball but had to coach it anyway. He learned on the job, and in seven years, his teams won two AIC crowns and one District 17 NAIA title. The outstanding pitching talents of Gary Wilson and Boggie Hester were overpowering against opposing teams. Wilson signed with the Houston Astros in a free agent draft and played briefly in the major leagues. He was named to the SAU Sports Hall of Fame in 2006. Coach George Henry, as head track coach, took both his cross-country team and his track and field teams to titles in the 1969–70 year. Coach Henry was later named to the NAIA Hall of Fame. Among many fine runners who competed for the coach, Tim Henry from Indiana stood out. Although Coach Delwin Ross’s swim team never won a state title, it did have champion swimmers like Jack “Butch” Jordan. Dr. Richard Carter, chair of the physical education department, coached tennis teams to three straight AIC titles from 1972 to 1974. The outstanding star of those years was Gary Snay, the AIC top singles player. The bowling team also won an AIC crown in 1973.

Dr. Larry McNeal’s primary sports assignment was the intramural program that he took to new heights beginning in 1965. By 1970, it had thirty-five activities, and 75 percent of the student body participated, including two squads of faculty who called themselves Mulementors and Burro Busters. Briefly, from 1973 to 1976, McNeal also coached both men and women’s gymnastics teams.

The first women’s volleyball team was formed in 1971 when an additional women’s coach was hired. But in SSC’s financially lean years, Dr. Margaret Downing had to pull double duty in volleyball as well as basketball. Under her direction, the team won back-to-back AWISA titles in 1974 and 1975. Volleyball players also played basketball for Downing. Janet Cooper, Rosemary Spigner, and Sara Wooley led teams to three straight AWISA basketball championships from 1974 to 1976. 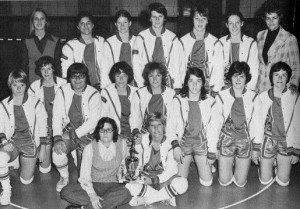