An important effect of federal aid was to improve SSC’s faculty. The percentage of faculty with a doctoral degree grew from 12 to 40 percent by 1974. Most of these degrees were added between 1967 and 1976 by SSC faculty, with master’s degrees, returning to graduate school. Title III of the Higher Education Act (1965)—named Strengthening Developing Institutions—paid for the improvement. From 1967 to 1972, SSC received $615,000 in Title III funds to send seventy-seven faculty to graduate schools, usually on a half salary. 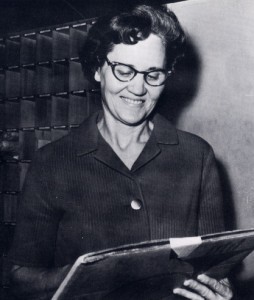 Maxine Carter, the Snackbar Lady in 1976 (Click photo to enlarge)

This young faculty of similar background was somewhat provincial but strongly loyal to the institution, shared a camaraderie that crossed departmental and disciplinary lines, and achieved a remarkable rapport with students. Faculty from English, business, history, art, physical education, and other departments would walk over to the student center each weekday morning to pick up their mail from postmistress Aloyise Hipp. A cup of coffee from Maxine Carter at the snack bar might follow, and gossip and information would flow as faculty gathered at nearby tables. One large table in particular attracted the most faculty. Students in good humor referred to it as the Round Table but never said which faculty member they thought was the king. From their mail, the instructors might read the week’s Faculty Bulletin, begun in 1968, to learn details of other faculty activities. Morning coffee in the student center also promoted informal exchanges with students who also had easy access to the two dozen faculty who still lived with their families in residences on both the west and east sides of campus.

There was the same kind of family-like atmosphere among longtime support staff who, like the faculty, were in daily contact with students. The staff ’s friendly help led many students to remember them, in some cases, more than faculty. An incomplete listing of those who began work at SSC in these years, several of whom were alumni, who gave decades of service would include the following: at Overstreet offices, Arvia Askew, Sara Couch, Cassie Farrar, Dorothy Duncan, Dorothy Knowles, Bonnie Powell, Jimmie Watson, Wilma Williams, and Jean Williams; at the SSC bookstore, Rena Richards; at the computer center, David Keith; at the physical plant, Doug Farrar, Wendell Stroman, and Edsel Talley; as campus nurse, Mary Johnson; among building custodians, Fred Alexander, Henry Clayton, Tobe Edwards, Almer Jefferson, and Mildred Runyan; and as “dorm mothers,” Nora Byers, Mary Dale, Opal Fabian, and Clova Williams. 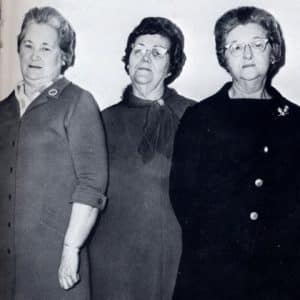 No staff member was more widely known or better liked by the school’s students through six decades than Earl Miller (Click link for photo). He began as a student driving buses for athletic teams and other student groups in the 1950s and continued into the twenty-first century. In those years, he safely drove students all over the United States, arriving almost always on time and never losing his way. Always cheerful, his ruddy face was lighted constantly by a wide smile and happy greeting for all who came his way; he was the school’s roving ambassador of friendliness. Perhaps he never smiled more widely than the day he picked up SSC’s new blue and gold bus from Belgium when it was unloaded in 1970 at a New Orleans dock, and he no longer had to drive the college’s old bus. He called the new bus Big Blue and later Ole Blue (Click link for photo).

Earl Miller as SSC student in 1952 (Click photo to enlarge)

Compensation was not a reason for staff or faculty loyalty or why instructors chose to remain at SSC. Salaries remained low, but most of the non-academic staff benefited in 1974 from legislative action bringing them under the Arkansas uniform classification and compensation system for state employees. Arkansas ranked last among southern states in faculty salaries, and the South generally lagged behind the nation. At a time when the average salary at public liberal arts colleges in the South was $9,426 (1966–67), the SSC average was $7,536. Dr. Bruce did gain board approval for various measures to supplement the low salaries, including free tuition for spouses and children, subsidized medical insurance, and the addition of TIAA/CREF, used at most colleges across the nation, as a better plan than the Arkansas Teacher Retirement System.

Faculty were stressed about money in this era. Salaries did not keep pace with inflation. Dr. Bruce did as well, perhaps better, as anyone could have with SSC’s limited resources. But by 1973, all ranks except that of instructor earned on average less than faculty at Henderson State, Arkansas Tech, and the State College of Arkansas. SSC’s faculty could only echo the long-standing remark Arkansans used when finding their state behind, “Thank God for __________,” but substituting Monticello for Mississippi. Salaries at that sister institution always lagged behind SSC’s.

Dr. Bruce retained much faculty support. But over time, his difficulties with students, salary issues, and a management style that resisted sharing governance produced a greater willingness in the Faculty Affairs Committee (FAC) to challenge him. The FAC was the faculty’s principal representative body, but its description in the 1967 Faculty Handbook gave it little power or responsibility. It was limited to dealing only with “problems, other than academic and budgetary, which relate to the condition of faculty service.” No records have survived to indicate how or when a much broader FAC description in the 1954 Handbook’s revised edition was narrowed.

Ironically, the firing of Donald Baldridge in the SURE controversy opened an avenue for power to flow back toward FAC. Almost everyone wanted AAUP to lift its censure. That required among other steps a complete revision of handbook provisions on rank, promotion, tenure, and termination to comply with AAUP standards. FAC took up this task. Dr. Bruce’s criteria and practices with respect to awarding promotion or tenure had not been clear and certainly not transparent. Promotions occurred essentially when he decided. FAC worked for several years through numerous revisions before finally arriving at new policies that met AAUP standards. In the end, AAUP approved SSC’s new policies but did not take it off the censure list because the college’s administrators and boards of trustees resisted, for twenty years, paying compensation to Baldridge, who had become a history professor at the University of Idaho. While dealing with promotion and tenure, FAC step-by-step redefined in practice its role at SSC, even while its narrow handbook description remained unchanged.