While the faculty was busy with NCA review preparations, Dr. Camp also had to deal with pressing building needs and increases in the size of faculty and student body. Lake Greene’s physical plant employees and private contractors continued to build faculty housing. These units were located largely on the east side of campus along Crescent and Circle drives. By 1957, SSC had a total of eighteen single-family homes and sixteen apartments, ten of them duplexes, and six single units.

As a result SSC was, like its predecessors TDAS and A&M, a residential community for many employees. Of eighty-one faculty and staff in 1955–56, some thirty-seven lived on campus, many with growing families. At one time on the east side of campus, the yards were filled with twenty-two young children. Dean Kibbee’s wife, once her husband left for the office and the children for school, circulated the neighborhood on many mornings, with a coffee pot in hand, to visit with other young mothers and wives. In these days, before TVs became common fixtures in people’s living rooms and dominated evening hours, spontaneous get-togethers for canasta and bridge and just to visit were frequent, as were multifamily backyard potluck cookouts, especially on Friday paydays.

Like the growing faculty, a larger student body also needed more facilities. Dr. Camp in consultation with the architectural firm of Wittenberg, Delony, and Davidson developed in 1954 projections for needed expansions. These included more dorms, a gymnasium, a student union and cafeteria, and an engineering building. Camp secured board approval for yet another bond issue in March 1954 for construction of a new men’s dorm and thirty married-student apartments plus conversion of two older dorms to offices and classrooms. 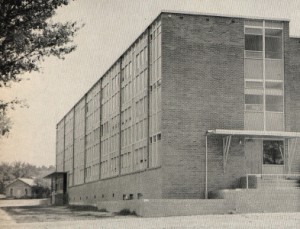 A plan to erect a men’s dorm in a colonial style to match Bussey, Overstreet, and Peace halls and located on the west side of campus on a line directly opposite the women’s dorm was scrapped to save money. Instead, a modern functional style design was selected. The new building was to occupy the site of the deteriorating trailers of Wilkinsville that would be sold at auction. Within a year, Graham Hall (named for Dean Graham) was completed at a cost of $237,801. It opened at the beginning of the 1955 fall semester. A three-story boxlike structure of glass, steel, and brick, it housed ninety freshmen and thirty upperclassmen. Jackson Hall was remodeled at this time for the division of business and commerce and Caraway for the divisions of social sciences, education, and the art department. New married-student apartments were built on the eastern edge of the campus (the present location of University Village).

A grand Dedication Day was held at homecoming in 1955 with U.S. Senator J. William Fulbright of Arkansas, chairman of the Foreign Relations Committee, as the featured speaker. The library and the men and women’s dorms were formally named for James M. Peace, Mrs. Carro Bussey, and Dean Earle E. Graham, all of whom were present to receive the honors. The alumni association agreed to help fund a painting of each honoree to hang in the buildings bearing their names. Mrs. Theo Middlebrook of Lewisville, Arkansas, a noted artist who for a time had a studio on campus and taught noncredit classes, painted these portraits.

Within six months of Dedication Day, Dr. Camp obtained board approval in March 1956 to issue more bonds to finance construction of a fine arts building and a president’s home. The fine arts structure (later named Dolph Camp Fine Arts Building in 1963 to honor the former president) was to house the music department. The architectural theme of the colonial Georgian style that had begun with Overstreet was revived. The structure was
completed by the 1957 spring semester at a cost of $269,984. The two-story building, air conditioned and soundproofed, had twenty-nine rooms for offices, classes, band practice, and student rehearsals. A performance auditorium seated 130 and contained a large pipe organ and a nine-foot concert grand piano. The bond issue also paid for numerous additional pianos and other equipment. 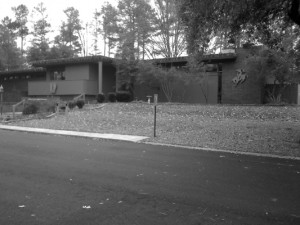 The president’s home [later the Welcome Center] was completed in early 1959 at a cost of $73,138. Initially, plans called for the residence to be located east of the Greek Theater on the site of the Clubhouse that would be moved. Due to financial constraints, the board later left the location up to Dr. Camp and Lake Greene, physical plant director, who chose a spot northeast of Mulerider Stadium. Inadequate funding probably caused the men to decide upon a modest ranch-style home. Unfortunately, its size did not permit, as an official residence, future presidents to comfortably host large receptions of the kind expected of college leaders. 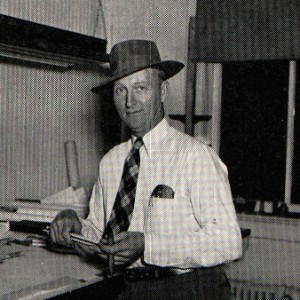 With the 1956 bond issue, a “limit to indebtedness” had been reached, Camp declared. By then, SSC’s bonded debt had reached $1,726,000. Without any state assistance, the school since 1950 had erected four major buildings plus the president’s home and had remodeled two older dorms to obtain more classrooms and offices. Dr. Camp used reductions in faculty, increased student fees, and hopes of future income to pay the costs of facilities expansion. Immediately after achieving accreditation, for example, Dr. Camp did not renew the contracts of seven faculty members. Between 1950 and 1960, upon his recommendation, the board more than doubled student tuition fees (from $30 to $85) and increased room and board fees appreciably. Student fees accounted for 10 percent of SSC total income in the early 1950s. Ten years later, increased fees made up 18 percent of the income. In an attempt to profit, the board authorized drilling for oil at the farm, but the only well drilled reached 4,490 feet without striking anything but dirt. When the wind blew its remains over campus, students referred to the well as the great “duster.”

Dr. Camp’s financial high wire act caught up with him in April 1957 when the Arkansas Gazette ran a story that a legislative audit had discovered the practice of “deficit spending” at SSC. The headline exaggerated the matter’s seriousness. The text of the story, drawing upon the audit report, recognized that Dr. Camp had been forced to choose between risking financial instability and not gaining accreditation. Camp had engaged in the practice of using funds from a future fiscal year to pay expenses of a past fiscal year, i.e., carrying forward unpaid bills from one fiscal year to the next. He told the SSC board of trustees that due to large funding increases voted by the 1957 legislature, his deficits would end.