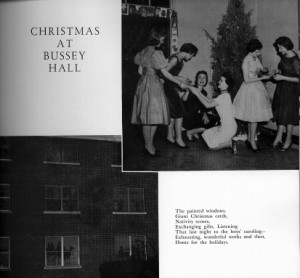 A magnificent new women’s dorm opened in the 1951 spring semester. It was later named for Jesse and Carro Bussey, longtime dining hall directors. All coeds on campus were housed for more than a decade in Bussey Hall, leaving other campus dorms to men. The women long remembered that they began moving their belongings to the new residence on Sunday, February 5, during a heavy snowstorm. Initially, only seventy-seven women occupied the dorm that had room for two hundred. Like Overstreet Hall, the three-story dorm had a colonial Georgian architectural design. It cost $485,555 with school bonds covering immediate costs and principal and interest repaid over the long term by room fees.

The Bussey coeds were a close-knit group and were permitted a measure of self-governance with the establishment of a women’s council on September 18, 1951. A men’s council followed in 1956 but never had the same success as the women’s. Gene Lee was elected the first women’s council president. The highlight of each year at Bussey Hall was the Christmas celebration. All dorm windows were elaborately decorated for the campus to enjoy. A “Secret Pal” week provided an opportunity for generous friendship, and Santa Claus visited. Santa was Milton Talley, appointed dean of students in 1952. He came in full costume and white beard, playing Santa with great gusto. The young women hung six stockings for Dinah Butler, the dorm’s African American janitress who since 1948 had “mothered her girls,” first in Nelson Hall and then in Bussey. She would become a living institution for two generations of Bussey women.

The coeds had another substitute “mother” in Dean of Women Margie Harrod who, with her husband, George, lived in a Bussey Hall apartment. She was always reminding the young women what was required to be a “lady.” A childless couple, Dean Harrod and her husband on occasion “adopted” one or more of the coeds during their SSC years. Ruth Couch recalled that Dean Harrod arranged for the Magnolia Quota Club, which Harrod headed at the time, to give Ruth a complete wardrobe at Christmas, which she badly needed. Couch also remembered how the Harrods used their car to teach her to drive because her own parents were too poor at the time to own an automobile. 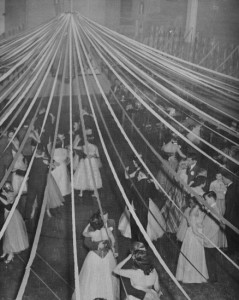 Upon completion of Peace Library, the old library (originally the dining hall, 1913–37) was converted once again, this time into a new student union. With a $75,000 bond issue, the conversion provided a large ballroom for gatherings, a bookstore, a post office, and a student snack bar-lounge. For a time the snack bar-lounge had two jukeboxes, often playing at the same time, since competing local vendors insisted that they both have market access. Richard Samuel replaced James M. Peace as bookstore manager when Peace, who had earlier retired from the library, retired a second time. At the same time Samuel’s wife, Helen, took over as postmistress when Julia Graham, Dean Graham’s wife, resigned on July 1, 1952, ending eighteen years of service.

Formal dances were held in the fall and spring and at Christmas and Valentine’s. The Varsitonians continued to entertain at these events. Their leader, SSC band director Richard Oliver, and his horn men swung to a rhythm begun decades earlier. By the late 1950s, a new beat—rock and roll—began to drown out swing. The Varsitonians faded. One local band, the Uniques, composed of several SSC students, began as the Cut-Ups in the late 1950s, hoping to follow the path from obscurity to fame with hit records like Buddy Holly’s Crickets. The Uniques, with lead singer Joe Stampley, in the 1960s enjoyed a measure of regional popularity and had guest spots on a few national shows. 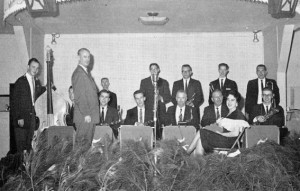 Few students stayed on campus for the informal weekend dances. As incomes increased in the 1950s, more cars appeared on the road and on campus, and it became easier to catch a ride home. The college became more than ever a “suitcase school” where students kept a bag packed for Fridays and went from “dorm to marm.” Activities during the week attracted larger participation, but complaints about the inactivity of student clubs on weekends were frequent.

Students never overlooked an opportunity to name a “campus beauty.” Every men’s dorm had its sweetheart. There was a queen for the annual intramural festival of the physical education department. Competitive beauty pageants also appeared, and celebrities were no longer asked to choose a campus beauty. In 1955, country singer Tennessee Ernie Ford was the last star to select his favorite photo of a young woman for the title of Miss Photogenic from among fifteen freshmen coed swimsuit photos that had initially appeared in each issue of the Bray in 1954–55. Pageants began in 1956 when judges picked, as the first Miss SSC, Anne Frances Wooley. Three years later, the Miss SSC contest became a preliminary event for the Miss Arkansas and Miss America competitions. In 1954–55, two SSC women, Waydine Nesbitt and Sue Farrar, represented Arkansas in the annual Cherry Blossom Festival in Washington, D.C. A Miss Southern Belle was chosen as the queen of the annual Aardvark Variety Show sponsored by Alpha Psi Omega, the honor society in drama. This show’s cast of performers included talented students and faculty in comedy skits and musical productions. 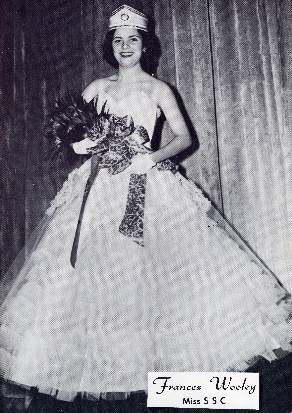 The Da Capo Club, organized by music majors on October 4, 1950, sponsored a similar event, the Follies, where the new piano instructor Robert Campbell pounded out and sang a composition that he titled “Mulerider Blues.” Da Capo also initiated a film series that often showed foreign features. The music department’s A Cappella choir gave spring concerts during an annual tour of regional cities. It formed the nucleus of a “town and gown” choir that sang Handel’s Messiah during many Christmas seasons. Kermit Breen, the choir director, also began an opera workshop for students and interested local singers. When the South Arkansas Symphony was established in 1960, Breen and other SSC faculty and students were often among its musicians. Robert Campbell researched and wrote its comprehensive program notes for decades afterward.

Margaret Harton’s Stagecrafters produced many light comedies and mysteries. Occasionally, there were more serious satires like George Bernard Shaw’s Caesar and Cleopatra and dramas by Tennessee Williams, Truman Capote, and Maxwell Anderson. The most unusual play in the 1950s was the musical comedy Goal to Go, written by amateur playwright Frances Stroup, head of SSC’s physical education department. It was a joint effort of that department and speech and music. At annual banquets for Alpha Psi Omega and the Stagecrafters, Harton announced “Best Actor” and other awards. Students themselves each year picked a “Mr. Stagecrafter.” In 1961, junior Harry Thomason, later a successful television and movie director and producer, was so honored. 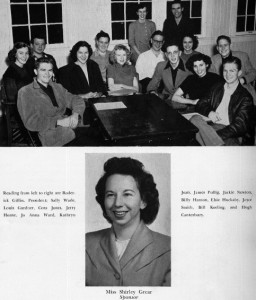 Students ran the state’s only college radio station—KSSC—that lacked institutional financing and had no paid staff. It went on the air on April 23, 1954, after students in speech instructor Arthur Prosper’s radio class led by Mac Woodward decided to raise funds from local benefactors to purchase equipment for a low-power five-watt station. To keep it going, students sold advertising. Its signal did not reach beyond campus, and broadcasts were confined largely to evening hours. It remained on the air until 1959 and broadcasted intermittently in later years.

By 1957, SSC had twenty-seven student organizations. As always, among the most active were the various religious groups. Approximately 46 percent of the student body was Baptist and 26 percent Methodists, but more denominations had student groups than in the past, including Presbyterians, Catholics, Episcopalians, and Assemblies of God. A religious council was formed in 1954 to ensure equitable representation in sponsoring the Religious Emphasis Week and in other matters. The larger groups erected facilities just off campus. The Wesley Foundation (Methodist) and the Baptist Student Union constructed new buildings in the late 1950s. The Association of Baptist Students shared housing with a previously established Bible school. 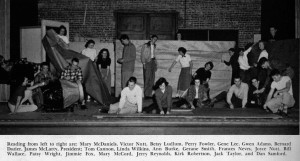 Most clubs were associated with departments, and among the largest, reflecting changes in student career choices, was the division of business’s Tri-C Club (originally the Commerce Civic Club). It held an annual banquet to recognize outstanding students with such awards as the Wall Street Journal Student Achievement Award. Almost as large as Tri-C, if memberships were combined, were the clubs of education majors. The Future Teachers of America (later the Student National Education Association) and the Association of Childhood Education held programs for career development in the profession of teaching.

In 1957 and 1961, a few students participated in an unusual extracurricular opportunity. George E. Fay, a young anthropologist and sociology instructor, led students on trips to Mexico. Fay frequently conducted archeological excavations in the state of Sonora, Mexico, and students benefited from these cultural and educational experiences. 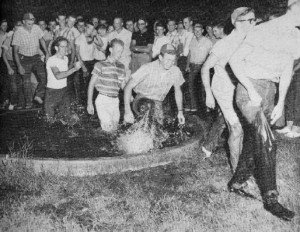 While Greek letter honor societies were acceptable at SSC, social fraternities and sororities were not. SSC’s sister institutions at Jonesboro, Monticello, and Russellville gained charters from national organizations in the late 1940s. SSC administrators continued to oppose bringing such social organizations to Magnolia. Interested students asked on many occasions, most insistently perhaps, W. Derrell Rogers when he served as student senate president in 1959–60. Dean Talley and others would not budge. The administration was not the only barrier in the way of the Greeks; there was also student indifference and opposition. The Student Senate constitution explicitly prohibited representation of fraternities. In the 1956 Student Senate election, a presidential candidate who pledged to work for Greek organizations lost to one opposed. Dean Talley no doubt feared Greek life would discriminate against the large number of SSC students who could not afford its fees. He may have worried too about the Greek’s reputation, deserved or not, for partying rather than studying and their reported misbehavior. 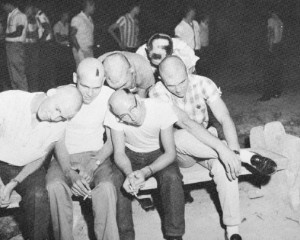 SSC in the 1950s seemed remarkably free of serious misconduct. Of course, students sneaked beer on-and off-campus and even gave Optimaggie some beer on at least one occasion to try make the animal “feel good” so it would “act up” for a game. A tradition of “panty raids” on Bussey Hall began in 1956. These affairs were lighthearted escapades although administrators harshly condemned them. Some coeds encouraged the raids and even briefly hid the few men who might actually make it inside so they would not be caught and punished.

Occasionally, upperclassmen’s physical harassments of freshmen during the annual rite of class initiation would get out of hand and on one occasion was serious enough that several students were expelled. Nevertheless, for most students it was all in good fun even if freshman men understandably did not like being tossed into one of the goldfish ponds near the older dorms or having shaved heads, practices finally banned in 1962. Freshman initiation began a new tradition in 1952 when for the first time all freshmen had to buy and wear an SSC blue and gold “beanie” cap for several weeks during the fall semester. Sometimes upperclassmen had good fun at the expense of freshmen naïveté as when Ronnie Ribble and fellow football players sold one-dollar subscriptions to the free Bray to unsuspecting newcomers in Cross Hall.