You are here: Home / SAU Archives / SAU History from the Archives / Illustrated Stories of SAU History / Southern State College, 1951-1962 / A New President, Scholarships, Elmer the Dinosaur, and the World 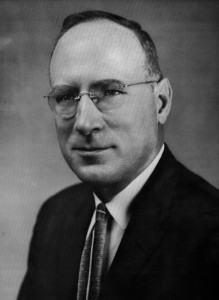 A search for a new SSC president began when Dr. Camp suddenly resigned on March 15, 1959, to take a position in the U.S. Office of Education in Washington, D.C. Dean Andrew was named provost while the board of trustees interviewed several candidates. The board quickly settled on Dr. Imon E. Bruce, then superintendent of schools at Hot Springs, Arkansas. An alumnus of A&M, Dr. Bruce had been a classmate of board member Dr. John Wilson in the early 1930s. Bruce had earned his B.S. at Henderson, an M.A. at LSU, and an Ed.D. at Indiana University. He began his career in education as a math and science teacher and later served as director of student teaching at ASTC, but he spent most his career prior to taking over at SSC as a public school administrator. He became SSC’s president in mid-April.

One of Dr. Bruce’s first duties was to preside over the school’s celebration of its golden anniversary. A series of campus events beginning in March took note of the upcoming birthday on April 1, 1959, the day when fifty years before Governor Donaghey had signed Act 100 (1909) creating the four district agricultural schools. Faculty and students presented a pageant about SSC history on April 2. Thirteen skits portrayed various past events and people. A costume ball was held on April 10 with a setting in the roaring 1920s. It also included a floor show with student and faculty song and dance performances. Dean Earle E. Graham rendered his last service to the institution by completing his “Brief History of Southern State College, 1909–1959.” His official retirement in the school’s fiftieth year and Dr. Bruce’s employment truly marked a new era in the institution’s history.

In 1959, Dr. Bruce was forty-eight years of age but appeared older. A tall balding man, almost never seen out of doors unless wearing a hat and an impeccable suit, he had a reserved personality but a dry wit. He brought to SSC a driving ambition to make the school an institution of academic distinction. He closely supervised every aspect of the school—students, faculty, staff, the farm, physical plant, athletics, finances—nothing was too small to escape his paternal eye. This approach would make it difficult for him to adjust to the turbulent 1960s when colleges and their presidents everywhere were forced to abandon the traditional roles of in loco parentis. An effective manager of the budget and a skilled negotiator with officer holders in Little Rock, Dr. Bruce would successfully lead the school through an era of great change and improvement.

He spoke to an assembly of students on May 11, 1959, and laid out his goals. These included attracting superior students with an improved curricula and making more facilities improvements. Following his lead, the Academic Affairs Committee approved the beginning of honors classes in the 1961 fall semester. That same year, Dr. Bruce initiated a privately financed honor scholarship program. Some local Magnolia organizations already had provided a few limited scholarships to SSC, and Bruce envisioned a much larger effort. Calling together a group of Magnolia business leaders in January, he challenged them to raise funds for one hundred four-year scholarships to attract students from the top 10 percent of high school graduates from across the state. A committee of William C. Blewster, C. R. “Bob” Cole, and Archie Monroe led an effort that by that fall had funded scholarships for forty-six outstanding freshmen. The scholarship program did not then establish an endowment but rather was funded by commitments of generous donors who agreed to contribute $250 each year to provide the four-year awards. Together with the aid available from a new loan program, the National Defense Student Loan Program that Congress established in 1958, these scholarships made SSC attractive and affordable to many fine students from beyond Southwest Arkansas.

Dr. John C. Chapman of the geology department and Ava Lee Cox in biology offered their best students the unusual opportunity of digging up a dinosaur at the beginning of the 1962 fall semester. An amateur fossil hunter from El Dorado had brought Dr. Chapman a fossil to identify, and he led a team to excavate a site near the Little Missouri River, eight miles south of Delight, Arkansas. The fossil remains were from a Cretaceous mosasaur, a swimming lizard, which had lived sixty million years earlier. Working on weekends, SSC and local volunteer fossil hunters dug out the thirty-to-forty-foot long marine reptile’s fossil remains that were brought back to the campus. In February 1964, Dr. Chapman awarded the twenty-three individuals who had participated special blue and gold certificates as charter members of a new society, the “Friends of Elmer,” the name selected for the dinosaur. A few years later, when Wilson Hall was under construction, Chapman and six students worked all summer putting the fossil bones together to display on the wall of that building’s first floor.

The scholarship program and increasing numbers of international and out-of-state students combined to produce a more diverse campus. It also grew in size as the leading edge of the baby boom generation enrolled in the early 1960s. In the mid-1950s, SSC briefly had a small number of Hungarian refugees, former “freedom fighters” who had resisted a Russian invasion of their country in 1956. By 1961, the school enrolled thirteen international students who became members of the newly established International Students Club (November 24, 1958), which also had American students interested in making friends and learning about foreign peoples and cultures. The largest numbers of international students were from Iran, many encouraged by the Shah of Iran’s drive tomodernize his country. In November 1961, SSC celebrated “Persian Day” in recognition of their presence. Although the Iranians generally received a friendly reception from local students and citizens, there was enough prejudice for Bray editor Bob Lancaster in 1962 to denounce “ethnocentric ignorance.” Most international students majored in pre-engineering and remained at SSC only a year or two. The first international student to complete a four-year degree was Young-soo Kim from Seoul, South Korea, who earned an industrial management degree in 1960.