There was some questioning of [SAU President]  Dr. [Steven G.] Gamble and the athletic department’s decision in 1995 to shift intercollegiate sports from the NAIA and AIC to NCAA Division II and the Gulf South Conference. Fans feared that SAU would end up fielding losing teams, unable to compete against larger schools in Mississippi, Alabama, Georgia, and Florida. SAU had continued to prosper in the AIC, winning three championships in volleyball, baseball, and women’s track and field and Coach of the Year titles for their respective coaches—Michelle Shoppach, Steve Goodheart, and Dan Veach—in the AIC’s final year. There was no choice in moving sports somewhere. Several Arkansas universities had already left the AIC, and it died after forty-seven years at the end of the 1994–95 season. Fortunately, most of the former AIC schools eventually moved to the Gulf South, whose western division came to consist largely of Arkansas’s universities.

In any case, competitive fears subsided when football coach Steve Roberts took the Muleriders to a 9–2 season, won a Gulf South co-championship, and notched a top ten ranking in the nation in 1997, SAU’s first year of eligibility in the new conference. Linebacker Fred Perry was named the conference’s Defensive Player of the Year, which helped launch his later successful professional career in the Canadian Football League. Roberts was named Gulf South Football Coach of the Year. The following season saw kicker Jason Williams named to the Burger King All-American team for his twenty field goals, one of which was fifty-seven yards long, setting conference records with both feats. Mulerider football was the Gulf South’s premier program for three years, wining twenty-six of thirty-one games in conference play from 1997 to 1999.

Although winning no conference titles, most of SAU’s other sports teams also advanced to Gulf South play-offs during the 1990s. The men’s basketball program performed especially well. Coach Brian Daugherty took his team to three conference tournaments from 1999 to 2001 based on the play of such standouts as Eddie Williams, Jody McPherson, and Shawn Mason. Enthusiasm for basketball was pumped up with annual “Midnight Madness” events beginning in 1999 when the team opened the season for fans with intramural games and prizes. A non-conference soccer team, most of whose players were international students, was also very active.

In these same years, SAU was also competitive in another way. Its student athletes placed in the top three of sixteen conference teams in academic performance. The National Football Foundation named Gulf South all-conference defensive back Eddie Key one of sixteen College Football Scholar Athletes in 2001. At the College Hall of Fame induction awards ceremony in New York City’s Waldorf-Astoria on December 11, this SAU senior criminal justice major received a plaque and an $18,000 postgraduate scholarship. After graduating from SAU, Key earned a degree from the School of Law at the University of Arkansas at Little Rock.

One result of moving to an NCAA Division II Conference was to renew women’s sports programs. The Gulf South commissioner determined that to comply with a 1997 U.S. Supreme Court interpretation of Title IX’s requirements of equality, SAU needed more women’s sports teams. When recruiting swim teams proved difficult, the athletic department’s new director, Jay Adcox, and staff polled students to determine preferences. The number one choice was fast-pitch softball. SAU had once had a slow-pitch program in the 1980s. Coach Kevin Blaskowski began the popular new fast-pitch program in 1999. Coach Wayne Garner also led a renewal of women’s tennis, beginning in 2001.

The Mulerider football squad achieved an outstanding record in 2003. Coach Steve Quinn, who had been an assistant under Steve Roberts, became head football coach in 2001. His early years were winning ones. In the 2003 season, the Muleriders compiled a 9–3 record and went to the Gulf South Conference (GSC) play-offs. Two of that year’s outstanding players, both named to several all- American teams, signed professional contracts. Wide receiver and kick return specialist Nik Lewis played in the Canadian Football League. Defensive back Jordan Babineaux became a regular strong safety and a cornerback for the NFL’s Seattle Seahawks. A new football coach, Bill Keopple, a highly successful coach at Texarkana’s Arkansas High School, led the Muleriders in the 2009 season.

Coach Sam Biley, named to head women’s basketball in 1995–96, had several great players over the years, especially Rachel Young, whose statistics in the 1990s established numerous unbroken school records. She was named to the SAU Sports Hall of Fame in 2007. Kim Davis helped lead the team in 2003–04 to its first ever appearance in GSC tournament play. She was only the second player in conference history to be named both Freshman of the Year and Best Player of the GSC. Biley was named 2004 Women’s Basketball Coach of the Year for leading his team to a 16–11 record. The team advanced to postseason play for the next three years. Biley announced in March 2009 that he would retire from coaching after one more year; Carrie Slaton, his assistant coach, was scheduled to succeed him.

Other SAU teams also competed successfully. Shawna Laurendine was named Gulf South Volleyball Coach of the Year in 2003 for leading her team to a 22–12 record and an appearance in the GSC tournament. Brittany Wright was the western division’s Volleyball Player of the Year. The fast-pitch softball team in 2003 took a share of the GSC’s western division championship and the following year advanced to the final game of the GSC conference tournament. Coach Dan Veach’s track and field teams’ runners often ran against NCAA Division I teams and performed well. Among the women, Beth Augenstein, Karin Meder, and Adriano Osornio were the teams’ most outstanding runners; and among the men, Jermaine Logan and Allan Reyes.

Baseball compiled the best record of all SAU teams after 2000. During Coach Steve Goodheart’s last years, the Muleriders were always in the running for a GSC title but never managed a breakthrough. Goodheart’s former player, Allen Gum, who had won the Charles Berry Hustle Award for his energetic performance in an NAIA World Series appearance in 1991, took the baseball team to the next level in GSC play after he became head coach in 2006. That year, the team had a 38–16 regular season record and won the GSC championship. Three of that team’s players—Ross Boudreaux, Jeremy Hambrice, and Lee Martin—signed professional baseball contracts. From 2006 to 2008, the team won forty games each season and in April 2008 gained the number one ranking in the nation among NCAA Division II schools. Its 2008 record of 46–12 matched that of the famed 1987 team. 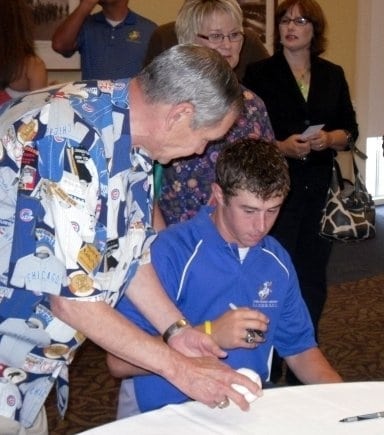 Ranked number one in the NCAA Division II in the national polls early in the season, Mulerider baseball had another great year in 2009. The team’s overall record-breaking 52 wins exceeded that of the 1987 champions. The 2009 Muleriders won the program’s second GSC baseball championship and the first GCS West Division title. The team’s ranking as the number one seed brought the NCAA Division II South Region tournament to SAU’s newly upgraded ballpark. After a strong opening in a mid-night game attended by more than a thousand local fans, the Muleriders succumbed to powerful Florida teams from the Sunflower State Conference. Players received numerous post-season honors. Seven Muleriders were named to the first team all-GSC baseball team. Pitching ace Hayden Simpson and second basemen Cannon Lester were first team all-American selections for the Daktronics Division II team, chosen by sports information directors across the country. At season’s end, third baseman James Schroeder and pitcher Aaron Terry were both selected on day three of the 2009 major league baseball draft.

[SAU President] Dr. Rankin and many others in athletics worked to improve facilities. Wilkins Stadium’s natural turf was replaced in 2006 with an artificial field at a cost of $685,000. In the middle of the field was a large Mulerider logo, and in the end zones, the names of the school and team in blue and gold lettering. A new concession stand and ticket booths, more seating, improvements in the press box, and a new seventy-foot flagpole completed the football upgrade. The Willard and Pat Walker Charitable Foundation of Fayetteville, Arkansas, made two generous awards to improve baseball facilities. A $160,000 grant with matching contributions from generous alumni and friends in 2005 provided lights for the field to permit night games for the first time in school history. A second grant for $500,000 in 2008 funded a new scoreboard and construction of a press box, concession stand, public restrooms, and other improvements. Plans were made to name the new facility Goodheart Field.

A notable addition to athletic facilities was the Mulerider Stables. Saundra Lewis, a Magnolia supporter of SAU, contributed seed money and the idea for the project as early as 1999. Other generous contributors added to university funds for construction in 2005 of this fourteen-thousand-square-foot equine boarding facility costing $425,000. It had room for fifty-nine horses of the rodeo team and one VIP mule, Molly B. Built on farmland north of the central campus but visible from Highway 82 bypass, the red stables had both a Mulerider logo and small Georgian columns at its front. 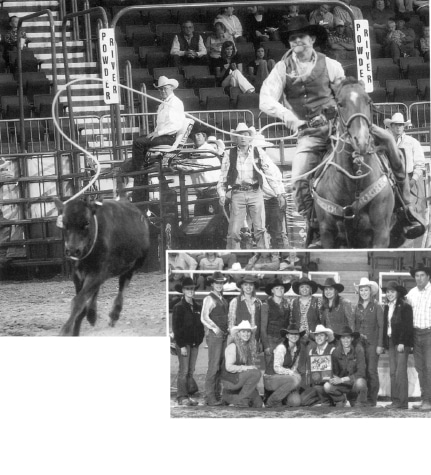 Cody Prescott and the 2009 Rodeo Team (Click photo to enlarge)