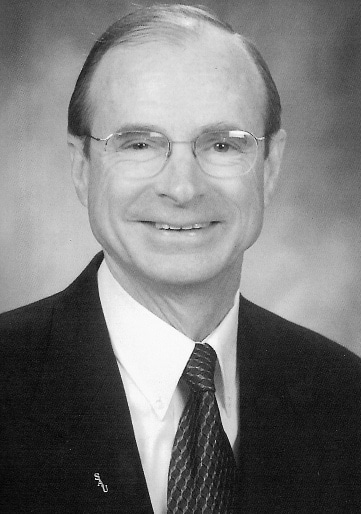 His [Dr. Steven G. Gamble] successor, Dr. David F. Rankin, in the last decade of the school’s first century, initiated an era of growth in facilities not seen since the 1960s and an expansion of university-owned land unequaled since 1910. The board of trustees selected Dr. Rankin after a six-month search process during which Louis Blanchard was entrusted with the position of interim president. A retired honor professor who had taught accounting at SSC and SAU for forty-two years, President Blanchard would serve until January 2002. The board employed a national search firm, Korn/Ferry of Dallas, Texas, a procedure increasingly common among universities copying practices from the business world. The board made one of its own members, Dr. Jerry Guess, a ’73 alumnus and superintendent of Camden-Fairview schools, chair of the search committee. The twelve-member committee was fully representative of all university constituencies consisting of four faculty and single representatives from other bodies, among them the staff, alumni, students, SAU Foundation, and the local community. The committee reviewed more than sixty applications that the search firm received and interviewed eight semifinalists. The committee took four finalists through a campus visit in which all faculty, staff, and students had an opportunity to participate.

Of the final four, the board chose the campus favorite, SAU faculty member and business dean Dr. Rankin, who had taught economics and finance at the school since 1968. A native of Junction City, Arkansas, he had earned undergraduate and graduate degrees from the University of Arkansas, Louisiana Tech University, and the University of Mississippi. At SAU, he was named an honor professor in 1986 and to the Puterbaugh Endowed Professorship in 1991. He had been a visiting professor and consultant in the creation of Ouachita Baptist University’s School of Business. He had also served as chair of the Arkansas Governor’s Council of Economic Advisers. Like many faculty members, he had often thought of how he would improve the school if he were president.