SAU’s academic program continued to adjust to new technology and society’s needs. New bachelor’s degrees were added in agriculture science, athletic training, criminal justice, exercise science, nursing, and social work. New master’s degrees were added in education and library science. A cooperative arrangement with the University of Arkansas at Little Rock (UALR) provided an MBA at SAU via compressed video. The Internet that exploded in the 1990s made this form of distance learning from UALR possible. 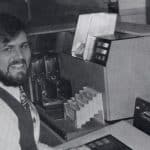 The Internet and the rapidly growing job market for computer science graduates led SAU to upgrade its computer science offering in 1996 from a minor to a major in the math and computer science department. A business-oriented degree in computer science information systems (CIS) had been established years earlier in the 1970s not long after SAU first computerized its registration and other processes. Dr. Albert Stecker had established the CIS program. Engineering Professor Ivan Brown and student assistant David Keith, who later became the longtime director of computer services, handled the mainframe that then dominated the world of computers. After Brown’s untimely death, SAU’s principal computer was named IVAN in his honor. Increasingly, personal computers (the PC) replaced the dumb terminals linked to central processing. In 1991–92, Keith and his staff linked these office and classroom personal computers to a fiber-optic campus network that in turn was connected to the Internet. The increasing reliance upon computers at SAU required a doubling of the technology staff from four in 1982 to nine by 1991. 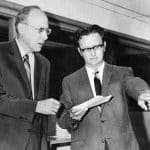 In many ways, they became the most important individuals at SAU. If computers did not operate properly, SAU grounded to a halt. The expertise of longtime staff, including Pam Burton Riggins, Kathy Cole, Doris Malone, Joseph Haney, and Gary Hickson, “saved the day” for many faculty and administrators. SAU cooperated with Southwest Arkansas leaders, who later formed in 2000 a Golden Triangle Economic Development Council. SAU provided land north of the main campus for a fiber-optic park to attract high tech companies. Other factors, however, limited its attraction. On the other hand, almost all activities at the university from registration to grades to finances to communication were successfully integrated through networked computers. In 1996, SAU placed its first home page on the Internet. By 2009, SAU was linked to the ultra-broadband network, known as ARE-ON, which gained access for Arkansas universities to supercomputers. 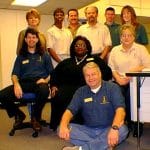 This new technology enhanced, some would say revolutionized, teaching and learning at SAU. Dr. Edward P. Kardas, SAU’s Macintosh computer guru, successfully promoted the establishment of fellowships for technology in teaching to reward faculty who embraced innovative instruction. The pace of technological change was so rapid that Dr. Gamble feared that the costs of updating software and equipment would swamp the budget. Placing Ronnie Birdsong in charge, he tried to exert greater control over its expansion. Among other measures, a ban was announced on maintenance or replacement of computers obtained by external grants, including those that Magale Library had obtained for student use. 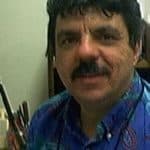 Dr. Ed Kardas, Professor of Psychology and Macintosh computer guru. For a time, he also ran a “Mac store” for students and professors to get a discount on purchases from Apple Computers. (Click photo to enlarge)

Computers and the Internet transformed library usage more than any other academic activity on campus. New library directors, first Dr. Kristi Tornquist and later Peggy Walters, eagerly embraced the new technology. As a result, the library’s catalog went online in 1991, and before the turn of the new century, students and faculty had access via the Internet and research databases to as much information as had been available a few years before only in the world’s major research libraries. Magale Library, by 2008, had access to seventy-five databases with thousands of full-text magazines, academic journals, newspapers, government documents, reports, and other research materials.

Dr. Ed Kardas, Professor of Psychology and Macintosh computer guru. For a time, he also ran a “Mac store” for students and professors to get a discount on purchases from Apple Computers. (Click photo to enlarge)