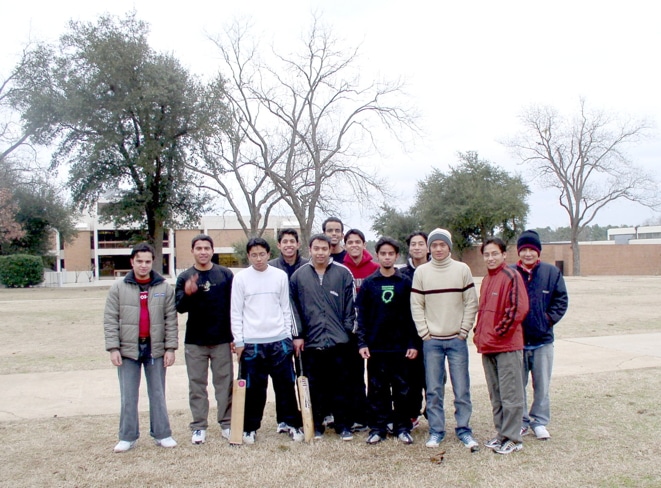 Not far from the spot where members of the 1919 football team once practiced on the Third District Agricultural School’s (TDAS) front lawn, one of those Mulerider’s nephews in 2002 watched a game probably never seen in Southwest Arkansas. A student ran forward and threw an old tennis ball, heavily wrapped in black electrical tape, toward another student who stood in front of a garbage can and swung a flat board as the ball bounced at his feet. The pitcher was a “bowler,” the batter a “batsman,” and the can a “wicket.” The observer was James “Jim” T. McCollum, a Southern Arkansas University (SAU) staff member whose great-uncle Carl had played on that storied undefeated Mulerider team eighty-three years earlier. The new game was “Gully Cricket,” a poor man’s version of England’s lawn cricket that was played on streets and in alleys across South Asia where the British Empire had once reigned supreme. McCollum stopped to watch and later to help these young men from India, Nepal, Pakistan, and other countries get equipment and uniforms to form the SAU Cricket Club. It gained official recognition on October 26, 2005. Salman Khan Afridi from the United Arab Emirates was its president.

SAU’s International Office each year sponsored a week-long celebration to recognize international students and to feature their culture and traditions with food and entertainments provided by the students themselves. (Click photo to enlarge)

The Friday afternoon scene said much about SAU as the school neared the end of its first century. It reflected the school’s  “internationalization,” one of many transformations. Among all of Arkansas’s colleges and universities, SAU had the largest proportion of international students. Almost forty countries were represented among its three thousand students. Only the University of Arkansas at Fayetteville equaled the 5 percent enrollment of foreign students that SAU had. While SAU had undergone much change, many of the institution’s features and traditions remained constant. The presence of McCollum in that scene of “Gulley Cricket” was a living link to the school’s past. His ancestors were among the small farmers whose pledges helped bring TDAS to Columbia County. His father was its first graduate to later complete a Ph.D., and he became a University of Illinois professor. Like McCollum, SAU reached out to the world while maintaining a strong connection with the past.

A large number of faculty—eighteen—had international origins. The largest contingent was from China, but others came from South Korea, Malaysia, Palestine, Panama, Ukraine, Vietnam, and Russia.

Dr. [Steven] Gamble [SAU president] approved the efforts of History Professor David Sixbey, aided by Dr. David Rankin, the business dean, to set up a professor-student exchange program with a Russian university. The first Russian exchange professor, Dr. Elena Solovova, came from Moscow State Pedagogical University in spring 1993. She returned that fall, and on December 11, 1993, university officials at the two schools signed an exchange agreement. In the years afterward, numerous Russian professors, all linguistic specialists, brought Russian students (a professor and two students for one semester each year) to SAU. Russian professors taught a course in basic Russian language and offered lectures about their country to campus and community audiences. Students enrolled in regular classes. Moscow State afforded a reciprocal arrangement although only four SAU professors and a handful of students over the next fifteen years traveled to Russia. Unlike Russian visitors’ command of English, SAU travelers generally were not able to converse in Russian.

Alpha Chi, the principal academic honor society at SAU, reflected the sea change in student demographics. The membership list of the highest-achieving junior and senior students after 2000 was as likely to include names like Gupta as Smith. The university admitted more international students, and by 2008, their numbers had increased to more than 165 students from every part of the globe. The largest number came from the small country of Nepal located high in the Himalayas, north of India. Dr. Dan Dykema, chair of the music department and sponsor of the International Students Association, came to so admire his Nepalese students that he traveled several times to Nepal to meet their families and to raise funds to begin a primary school there. International students were an integral part of SAU student life, active in many kinds of activities. In 2004, SAU had its first international homecoming queen, Faidhat Hoza from Tanzania. Two more internationals gained that honor in following years.

SAU continued to expand its own international programs. The Russian exchange program flourished in the capable hands of historian Dr. Svetlana Paulson and English department and honors college staff member David Wingfield. Dr. Elba Birmingham Pokorny of the Spanish department arranged study programs in Mexico. Dr. Rankin, in December 2008, signed an agreement with representatives of China’s Guizhou Normal University; SAU’s Asian historian, Dr. Charles Keller, had initiated the contact. The two schools pledged to develop exchange programs. Dr. Brian Canfield, the new vice president for academic affairs, established a study-abroad program for students in counseling and psychology in England during the 2009 summer terms. The family and friends of Professor Emeritus David Sixbey established in his honor a study-abroad endowment to fund student travel to Russia and other countries.