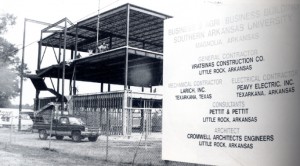 The new president’s contribution to campus facilities was mainly in renovations, but early on, Dr. [Steven] Gamble was able to complete construction of two new buildings planned in the last year of Dr. [Harold] Brinson’s presidency. The board approved construction of an art building (discussed in the previous chapter). At the same time, the trustees also gave the go-ahead for a new business building. SAU’s share of the college savings bond proposal’s proceeds that Arkansas voters had approved in 1990 funded both. Business/Agri-Business Building was the new building’s name because SAU had a degree in agri-business in addition to its full business curriculum. For the most part, however, the building would house only business faculty and classrooms. Site clearing for the 51,123-square-foot three-story classroom and office complex and a large parking lot required the removal of several faculty houses. Among them was the former home where school heads had lived in early decades. The new building began at about the same time Dr. Gamble arrived on campus in March 1992. When completed some eighteen months later at a cost of $4.3 million, the steel, brick, and glass structure lay west of the central campus and north of Wharton Nursing Building. Its main entrance faced north toward the farm. Its lobby opened into a striking three-story atrium that led to offices, computer labs, seminar rooms, and lecture halls. It would house a state-of-the-art video classroom with access to satellite and the Internet for distance-learning opportunities. The business school’s outgoing dean, Dr. Gayle White, and its incoming dean, Dr. David Rankin, raised endowments for each classroom of the building to assure students and faculty would always have the latest in instructional equipment. The additional parking added to the area between the nursing and business buildings was much welcomed. Beginning in the 1960s, many students came to SAU with cars. By 1991, there were 2,585 cars registered but only 1,489 parking spaces, 71 of those reserved for various purposes. 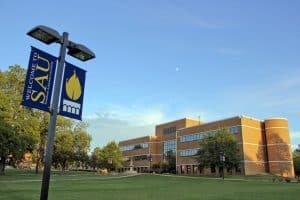 The SAU Business Building in 2009 (Click on photo to enlarge)

Most of Dr. Gamble’s actions to renovate and upgrade older buildings and other facilities on campus were much appreciated. Some changes were cosmetic, like placing artworks at Harton Theater and Magale Library. A sculpture, Window of Ideas, by former student Michael Don Fess was erected in front of the library on October 5, 1999. Visiting artist Melchor Peredo employed the style of Mexican muralists to paint large murals in 1999 depicting SAU history for the theater’s lobby. Other changes involved naming four existing structures to honor former faculty and staff. The Auburn P. Smith Field House at Wilkins Stadium and the Pat Williams Lecture Hall in Wharton Nursing Building were both named in 1995. The Dr. Lowell A. Logan Biological Field Station at Lake Columbia was so designated in 1997 and the W. T. Watson Athletic Center (gymnasium) in 1998. Other facility upgrades were mandated by requirements of the 1990 Americans with Disabilities Act (ADA).

Between 1994 and 2000, several buildings underwent major renovations, one of which made a major addition to campus facilities. A wing was added to the gymnasium. When dedicated during homecoming, October 31, 1998, it was named the Dr. Kathryn Smith Brown Health, Kinesiology, and Recreation (HKR) Complex. Dr. Brown’s career in teaching and coaching spanned fifty years at Magnolia A&M, SSC, and SAU. Additional funding from the state college savings bonds program as well as a separate SAU bond issue had been expected to fund either a remodeling of the older Graham Hall or a sufficiently large Brown complex to house the entire School of Education. However, rising construction cost estimates limited plans to a Brown complex, which accommodated only the needs of the HKR department and athletic programs. The Brown complex cost $3.4 million. It included new office space and classrooms as well as basketball, volleyball, and badminton courts, locker rooms, a physical therapy room, and a fitness center, available to the SAU community and for a small fee to local citizens. During the summer of 1998, Cross Hall was also renovated; its most extensive changes included new windows and the addition of an elevator and ADA-compliant restrooms. Peace Hall was renovated in 1999–2000 at a total cost of $1.3 million. When the School of Business moved to its new building, the psychology and sociology departments had relocated from Cross Hall to Peace. As the department added degrees in criminal justice and social work, remodeling was necessary. Renamed the Department of Behavioral and Social Sciences, the larger department reentered Peace after asbestos removal and remodeling were completed in fall 2000. 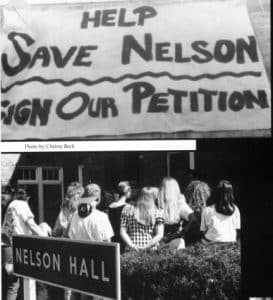 Several of Dr. Gamble’s decisions about facilities were unpopular. SAU had earlier applied for a college facilities loan of $799,000 from the U.S. Department of Education to renovate Caraway Hall. It was approved in fall 1992. Shortly thereafter, the building was placed on the state registry of historic buildings. Out-of-state foundations had provided $200,000 to renovate Jackson Hall. Expectations were high that the last two remaining buildings of the original campus would be preserved. But in 1994, Dr. Gamble recommended and the board of trustees approved their razing that summer on the grounds that preservation’s cost was prohibitive. To save Caraway alone, he told the board would cost $980,000. To some alumni, that amount did not seem too high to preserve school history.

Instead of preserving Caraway, Dr. Gamble recommended and the board approved issuing $2.3 million in bonds for other campus improvements. Some $950,000 of this fund was to convert Nelson Hall into an administrative office building. Nelson had served as a women honors students’ residence after their earlier home, Cross Hall, was converted, in 1976, into faculty offices and classrooms. Nelson Hall women did not want to lose yet another special residence and protested against the change. They circulated petitions, obtained a vote of support from the Student Senate, and made a presentation to the board of trustees to “Save Nelson.” They were assured that a wing of Bussey Hall would thereafter be dedicated for honors women. It was becoming the practice to group students of similar interest, such as fraternities and sororities, in wings or floors of residence halls. For the first time, some halls were made coed. Men’s Talbot Hall, north wing, became the home of female students in August 1995. 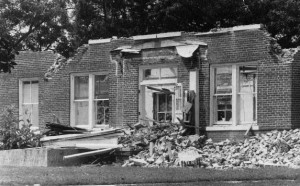 Jackson Hall ‘s demolition in 1994. Jackson Hall was the last of the original buildings of the Third District Agricultural School that still left at SAU.(Click photo to enlarge)

Despite the promise of a Bussey Hall wing, the departing Nelson women, as the 1994 spring semester ended, covered their doors with black paper, placed tombstones around the building, and conducted a mock funeral service for the hall where generations of women had lived. As Caraway and Jackson halls were torn down in summer 1994, Nelson’s conversion began. It included the addition of an elevator to comply with ADA requirements. After other extensive renovations, it reopened two years later in summer 1996. It then housed the registrar, admissions, communications, advising, placement, counseling and testing, and the SAU Foundation and development offices

The modification of Dolph Camp Fine Arts and the Brinson Art buildings caused greater campus upset than the conversion of Nelson Hall. When asbestos was found in Dolph Camp in 1996, Dr. Gamble proposed moving the music department into Brinson, the art department’s home. He emphasized to the Faculty Senate in February 1997 the cost factor. Remodeling Brinson would cost only $300,000; removing asbestos from Dolph Camp would cost $633,000. Except for the Oliver Recital Hall, which was asbestos free, the rest of Dolph Camp would be temporarily mothballed. Art faculty and students, as might be expected since they stood to lose almost half their space to music, vehemently objected. The senate suggested taking $333,000 from the university’s $1.5 million in reserves to add to the $300,000 in hand to renovate Dolph Camp, allowing music to stay where it was. Faculty senators voted twice against Dr. Gamble’s plans. He moved ahead, nonetheless, recalling later that the move was a “no brainer. We had to do something to make music better, and art did not need the entire facility.”

He reported the faculty’s opposition to the board of trustees. In May 1997, the trustees backed the president’s plans, although not unanimously. At that same meeting, the board, in executive session, was divided, voting 3–2 to extend Dr. Gamble’s contact. Dr. Gamble understood that modern university presidents’ tenure averaged seven years in the United States. Controversial decisions like the ones he was making inevitably cost him campus and community support. As a result, that summer Dr. Gamble became a finalist for the presidency of Texas A&M at Commerce and made clear to the campus that while he was happy at SAU, he planned to move closer to West Texas and his family when the opportunity arose.

Subsequently, Dr. Gamble successfully sought $1.2 million from the Department of Higher Education and the Arkansas legislature in 1999 to renovate Dolph Camp. It was converted into the Technology Center to house campus computer services, including the main student computer lab. Oliver Recital Hall, with its pipe organ, was retained for the music department’s use. The renovation was completed at the end of 2001 at about the time that Dr. Gamble left SAU.