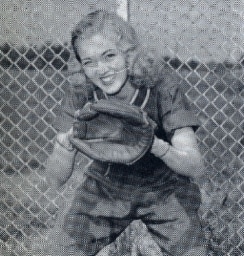 Kathryn Brown, the catcher, in 1949 (click here to enlarge photo)

Women athletes competed at A&M for the first time since 1930 but received no support. Colonel [Charles] Wilkins occasionally loaned the teams transportation but gave them nothing else. He did applaud the efforts of Kathryn Smith Brown to put together independent women’s teams in basketball and softball. There was no college conference in Arkansas for women’s sports. Brown, unable to interest other colleges in fielding teams, scheduled games with independent non-collegiate teams. Brown, like most teachers at A&M, wore multiple hats. She taught a full load of physical education classes each day, sponsored the cheerleaders, and was determined to coach women athletes. She had participated in competitive athletics as long as she could remember. A talented natural athlete, Brown had played for her hometown’s high school basketball team when she was only eleven years old. The new college publicist Dick Ratliff managed to get her unusual record (and A&M) mentioned in “Ripley’s Believe It or Not,” a syndicated feature that appeared in many newspapers across the country. 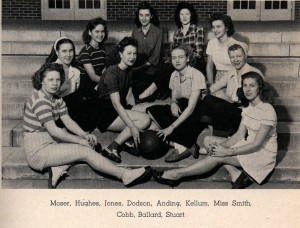 Brown recalled that local citizens strongly supported her softball teams: “Everybody in town came to games.” The Chatterbox café sponsored the team, the Magnolia Kats, by buying uniforms and equipment. The summer of 1949 was the Kats’ best season. They won 20 of 24 games and made it to the Southwest Regional Softball Tournament at Camden before losing to a team from Baton Rouge, Louisiana. Brown played catcher on the team. 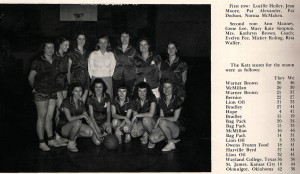