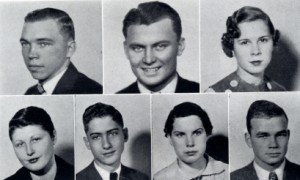 A student council was organized in 1911–12, [Third District Agricultural School] TDAS’s first year, but it soon disappeared. Its stated purpose was to “promote the general welfare of the student body” and to “reflect student sentiment.” Its first president was Roy Owen from Doyle, Arkansas. No record has survived to explain why it did not survive. The board of trustees, who wanted strict obedience to their policies, likely, did not favor the organization. There was probably some controversy connected with the first student council. The board adopted a policy in August 1912, declaring that students must adhere to all rules and that any faculty member or other employee “known to incite a revolution in the minds of students . . . or to cause them to in any way to set opposition to established authority shall be peremptorily dismissed.” Until 1936, student government, such as it was, rested with elected leaders of each class. The president of the senior class (later the junior college’s sophomore class) was recognized as leader of the student body.

Rule changes and the development of student government appeared almost simultaneously. Both began around 1931 after “an exhaustive survey of student government in various educational institutions in the country.”[ A&M President Charles A.] Overstreet announced that student monitors rather than male faculty would be used in the men’s dorms although later there was almost always an adult employee, often older widows, resident in the dorms. Students, men as well as women, were still required to sign out when leaving a dorm and sign in upon returning. But they could leave campus more freely and without a faculty chaperon. During the day, there were few if any restrictions, but at night, the study hours in dorm rooms remained. Even in this instance, however, a “special privilege” was established allowing students with no grade lower than a “C” some freedoms, a privilege that subsequently became a free “night-out.” On-campus dating was strictly supervised. Once couples left campus, they were on their own, required only to return by 10:30 p.m. Daily assemblies that had earlier often been chapel exercises featuring local church ministers were reduced to twice a week and by the mid-1930s to only once per week. Ministers came only once per month, and attendance at those religious assemblies was purely voluntary. Other assembly programs showcased campus group’s performance with an occasional lecture on duty and behavior by Overstreet.

Overstreet stepped back from dispensing discipline by the late 1930s. A body called the Faculty Council heard most cases, sitting as a court before which accused students had to appear; it imposed penalties ranging from expulsion to performing hours of free labor. This work usually consisted of helping Milton Talley in his efforts to beautify the grounds. He and students planted two hundred trees and shrubs during the 1930s. The punishment most often applied was being “campused,” i.e., not permitted to leave the campus or to engage in social events for a several weeks. One disciplinary rule was difficult to enforce. Historically “dry” Columbia County became wet after the end of state prohibition in 1935. Students who were old enough predictably drank beer in downtown Magnolia establishments in defiance and violation of A&M’s strict prohibition against student alcohol use either on—and off-campus.

Louise Powell, a freshman education major from El Dorado, in November 1935 wrote a guest editorial for the Bray, asking the question “Why Not a Student Council?” and listing favorable arguments. A year later, Bray editors Mary Luck and G. R. Trotter declared it was “only natural for the student body to feel that it should have representation in student government” and “natural for it to rebel against government by ukase.” Their declaration occurred almost simultaneously with the first student government election at Magnolia A&M on November 13, 1936. The student council was composed of seven members, four sophomores and three freshmen, although at the first election a faculty committee had to approve candidates. The first student government president was Russell Lewallen of Hope, selected by other student council members including David Butcher, Oliver Clegg, Gwendolyn Couch, Ruth Fell, David Jackson, and Louise Powell. Some A&M students perhaps thought their school late in permitting student government. Others no doubt knew it was not; several other state schools took this step at about the same time (Arkansas State College’s student government did not begin until 1947).

Contacts with other campuses influenced student government’s evolution and activism. The original constitution was changed after Lawrence Jarnigan and Mary Lynn Smith attended a statewide meeting of student leaders at Hendrix College in April 1938 called to consider a state association of student governments. They brought back Hendrix’s constitution, and it served as a model for A&M’s new one. Like Hendrix’s, A&M’s student body president and council members were henceforth elected in a campus-wide vote from among candidates in good academic standing. The first such contest took place in the 1939 spring semester. Bert Holmes defeated two other candidates to become the first popularly elected student leader. From its beginning, the student council pressed for rules changes. It obtained some modifications, including allowing more date nights. It may have also influenced the publication in 1938 of the first student handbook with all rules clearly listed. 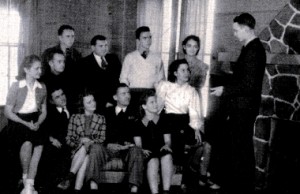 Student government was active in other ways. It gained permission to operate the school bus for rides to town each week, but this effort failed when too few students bought tickets. The council began sponsoring a Christmas formal dance. It also drafted rules for and conducted freshman initiation rites. The first formal initiation took place in September 1939 although the unsanctioned shaving of boys’ heads had occurred on earlier occasions. As formalized, freshman women, but apparently not men, were required to wear a green cap (used at many campuses to indicate the inexperience—the “greenness”—of freshmen). Initiates had to pay proper respect to sophomore women, follow odd dress rules that included such tomfoolery as garments worn inside out and attending class without having applied makeup. Men were treated more rigorously, having to run through belt lines, wear ties for a month, keep off the grass, and follow all sophomore commands. The climax of the month-long initiation took place when all freshman women and men were lined up with every boy required publicly to ask a girl for a date.