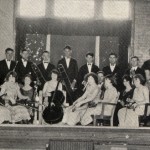 To announce the school’s new status as Magnolia A&M, [Professors Glenn] Martel and [Jewell] Stevens took the student musicians on tour in March 1925. In addition to orchestra members, the group of thirty-one included other students who acted in skits and sang as “black-faced” entertainers, then the most common and popular type of show throughout the United States. They traveled in the “Bussey bus,” which Jesse Bussey had put into operation in 1924 to transport students to McNeil and Stamps to catch trains and to take the football team out of town. The performers went to Blevins, Nashville, Mineral Springs, Ashdown, and Haynesville, Louisiana, on one weeklong trip.

Joining other American colleges in a common activity of the era, TDAS held the school’s first May Day Festival in 1924. It was, by all accounts, a modest affair. But in 1925, the newly granted college status for TDAS meant the second May Day Festival would reflect growing pride and excitement. On May 2, 1925, thousands of visitors witnessed a remarkable production staged by Glenn Martel and Jewell Stevens. 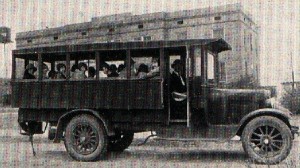 Based loosely on a legendary medieval English celebration of spring, the festivities opened with the “May Queen,” student Monnie Kent, riding on a palanquin hoisted on the shoulders of ten strong young men. All of the principals wore colorful period costumes. The queen was carried from the girl’s dormitory to her throne near the Lone Pine Tree [that students also called the “Trysting Tree.”] A tall Maypole stood nearby. As the school orchestra played a processional, a long train of attendants—ten young campus beauties, four little flower girls, and a little boy as a crown bearer—followed. Faculty parents of the five children beamed proudly. A huge audience gathered in a semicircle around the queen, king, and court. The May king, student Carl Wallace, conducted the ritualistic crowning of the queen. After this ceremony, all enjoyed a spring musical concert. Upon its conclusion, sixteen “Merry Maids” danced in intricate revolutions, accompanied by music, as they wrapped the May Pole in ribbons. The May Day Festival became an annual fixture at the college fordecades, but none matched or exceeded that 1925 extravaganza. Later that evening on May 2, the first college graduate of Magnolia A&M, Hazel Arnold of Hope, proudly received her diploma.