You are here: Home / SAU Archives / SAU History from the Archives / History of the Mulerider Name and Mascot 1950-1976 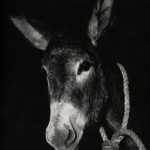 In the early 1950s, many students were caught up in the excitement of extracurricular activities, especially cheering for their championship Mulerider football teams and their new mule mascot, Optimaggie. After Coach Elmer Smith’s great teams of 1947 and 1948, who together had a combined win-loss-tie record of 17–3–2, fans expected more victories but instead suffered through a 3–7 season in 1949. It appeared that 1950 would be more of the same when the team lost the first four games.

Suddenly, the year turned around, beginning with the homecoming game on October 14, 1950. On that evening, the Magnolia Optimist Club presented a Sicilian mule (a donkey) to Dr. Camp for use as the school’s mascot. When the football program was discontinued in the 1930s and again in the Second World War, the practice of having a mule (often with a rider) at games had disappeared. The new mule, named Optimaggie (a combination of Optimist and Aggie), restored that tradition. 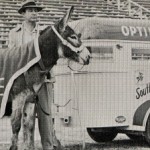 Optimaggie was a stubborn burro like the one famed World War II cartoonist Bill Maldin portrayed with weary GIs in the war in the mountains of Italy. During SSC football games, Optimaggie would bray loudly as though he were cheering on the Muleriders, but he sometimes brayed at the wrong times, interrupting local ministers’ prayers that preceded kickoffs in those days.

In accepting the gift of Optimaggie for the school, Dr. Camp predicted that the mule would so raise the players and fans’ spirits and fortunes that they would lose no more games. Whether or not it was Optimaggie’s presence, the result was indeed a remarkable turnaround and a winning streak for the rest of the season. The team had a 6–4–1 record in 1950 and 5 more straight victories in 1951 (11 wins in all) before it lost another game, that one to a non-conference team from Louisiana. In fact, from October 14, 1950, until September 26, 1953, the Muleriders racked up a string of seventeen victories in the Arkansas Intercollegiate Conference (AIC). When SSC lost to College of the Ozarks in 1953, many fans attributed the defeat to the fact that it was the first AIC game not attended by Optimaggie. 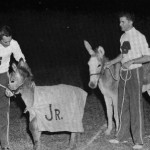 The Magnolia Kiwanis Club had purchased a $1,500 trailer for the mascot in 1951. Painted blue and gold and with Optimaggie’s name in bold letters, the trailer transported him to away games. But for some reason, he was not takento Clarksville to see the Muleriders play the Mountaineers of Ozarks on the night the winning streak ended. Optimaggie was later mated with a jennet and sired a son in 1954 who was named Adolphus (for SSC president Dr. Dolph Camp). For almost two decades, both father and son regularly appeared at all home games, but over time they attended fewer road (or away) games.

Almost every year during the 1950s, students from other schools tried to steal Optimaggie during the week before crucial games. This act was quickly labeled “mule napping” and often led to retaliatory raids by SSC students to get the mule back and strike a blow—usually with paint—against the opposing college. Optimaggie was successfully abducted by Arkansas A&M in 1950, Arkansas Tech in 1954, Henderson State in 1955, and Northeast Louisiana in 1956. There apparently were other unrecorded thefts. Optimaggie was not difficult to take from his special enclosure at Mulerider Stadium. It was on the edge of campus and unguarded unless students took special precautions. The abductions or attempted abductions happened so often, so the story goes, that in the late 1950s when the Muleriders lost many games, dispirited SSC students did not bother to go after the mule, forcing thieves to bring him back themselves just to get rid of the mule. 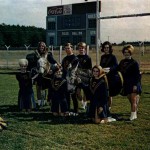 Coach [Raymond ‘Rip’] Powell’s great 1972 team’s victories would not be attributed to the magic of Optimaggie as had those of Elmer Smith’s Muleriders in 1950. Optimaggie had passed away in 1970. Less attention had always been paid to his son, Adolphus, who was infrequently brought to games. At homecoming in 1972, the cheerleaders of Ouachita Baptist University brought Adolphus from his farm corral to the football field to parade the mule at halftime, much to the embarrassment of SSC. Adding insult after the game, Ouachita students “mulenapped” Adolphus and kept him for three days in Arkadelphia.

Eddie Parham, who wrote a prize-winning column for the Bray and was a cheerleader in 1974, brought Adolphus out of retirement and sought to reignite the school spirit of the 1950s. He pointed out that Adolphus was getting old and needed a successor. He served as a co-conspirator with Mary Ann Peace and other Phi Beta Lambda leaders to substitute Adolphus when their gift of a successor mule did not arrive in time for presentation at the 1974 homecoming’s halftime ceremonies. Few in the crowd caught on to this substitution. The mule Phi Beta Lambda had purchased arrived later. The students named their gift mule 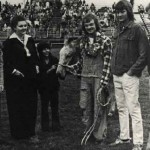 Imonaggie, a play on Dr. [Imon E.] Bruce’s first name. Parham was dropped as a cheerleader in 1975 probably because he persisted in wearing torn farm overalls as homage to the school’s early history rather than a regular cheerleading uniform.