Or, rather, the Ouachita River lowers enough to expose part of the S.S. Homer…

The leak in the Thatcher Lock and Dam, in Union County, has dropped the Ouachita (pronounced almost like “Washita” to those abroad) a lot, meaning a lot of things that are usually masked by higher water are now visible. One of these things is a part of the S.S. Homer, a Civil War-era steamboat that supported both the Confederate and United States Navy before sinking in the river at Camden in 1864.

The Homer, like so many naval vessels used during the war, was not built as a warship. It came out of the shipyards in Parkersburg, (West) Virginia, in 1859 and carried freight and people on the Mississippi, Red, and Ouachita rivers until the start of the war. Friend-of-the-station Mark Christ’s (2021) article about the ship on the Encyclopedia of Arkansas online tells us that the Homer “was placed under contract to the Confederate government, transporting men and supplies.” I threw this quote in because there’s a difference between a ship being under contract to the Confederate government and being a Confederate naval vessel. There has been some discussion on the Facebook posts about the appearance of the wreck today including comments about it being a Confederate naval vessel, which it may not have been.

The U.S. Army (elements from the 1st Iowa and 3rd Missouri cavalry regiments) captured the vessel on or around April 15 at a place 30 miles below Camden, and were grateful for the 4,000-5,000 bushels of corn that it contained. The ship was apparently sunk in the river around when the Army abandoned Camden on the night of April 26 (Christ 2021).

What Can You See Today? 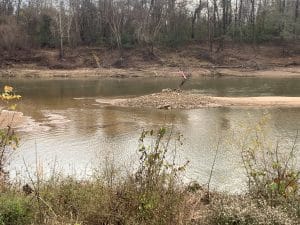 If you go to Sandy Beach park on the east side of Camden, you can see a large pile of bricks that is believed to be part of the remains of the ship. This would be the “flame bed” a platform of bricks that would be placed under the boilers to keep the heat and sparks from the wooden hull of the ship (Stewart-Abernathy 2008). I think it’s cool, but be aware that it literally just looks like a big pile of bricks…

Also, get on the Ouachita County Historical Society’s Facebook page and check out Dustin Hall’s excellent drone shots of the wreck!

Archeology on the Homer

My office, the Arkansas Archeological Survey, keeps tabs on archeological sites of all kinds from around the state, and keeps up with work other archeologists have done on those sites. In 1992, Charles Pearson, an archeologist with Coastal Environments, an archeological firm from Louisiana, dove on the site, following on from some earlier work in the 1980s. The site was mapped and some field notes were taken. The archeologists determined that a significant portion of the hull is there and still buried, and that it was an important part of American history that should be preserved. In recognition of that, the wreck site was listed on the National Register of Historic Places in 2002.

Though it’s strange to see the river low enough to make the Homer’s flame bed visible, it is not a bad thing to want to go out and look at the remains while you cans see them. Camden has a lot of great Civil War-related things around town, and this just adds to the landscape. So, by all means, go out and take a look. Take pictures! Use them to tell the history of the boat, the times, and your experience connecting with the past. That’s all great!

But bear a few things in mind. First, under a 2013 law passed by the state of Arkansas, all islands, submerged lands, and the property on them, including this wreck, are owned by the Arkansas Commissioner of State Lands. You cannot legally collect any item from the wreck site. I want you to know this so that you’re not placed in legal jeopardy by your historical interest. Seriously, don’t go collecting!

Second, I’ve seen some comments on Facebook suggesting that going out and collecting some of the bricks would be a way of preserving the past before the river comes back up and we lose sight of it again. I very much understand that motivation, but I want you to consider some things (besides the illegality of doing so… see above). Any archeologist will readily whip out the old maxim that “context matters,” meaning it’s not just the thing that you find, but its location, its connection to other things in the same site, etc., that are really, really important. You take a brick out of the flame bed, then you have a brick, which is cool, but you have less of the Homer’s flame bed in the wreck site, itself. That’s no small thing, as a systematic study of the entire wreck is better when it’s as intact as possible, and we ultimately get more knowledge and understanding of a site (ANY site) when it has been better preserved. So, please, if you go take a look, don’t take it home with you.

Edits: The original post claimed that the river was down due to drought conditions here in southwest Arkansas. Thank you to Sherrel Johnson, of El Dorado, for correcting the source of the low water levels.