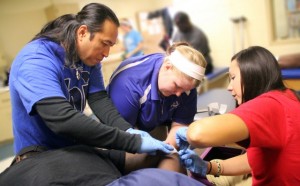 “Residents will be learning from our staff about sports medicine injuries and issues. They will also be able to teach our athletic training students about general medical illnesses and problems,” said Cole. “This is a great opportunity for SAU, our Athletic Training Program and our Athletic Training Department, as well as for the UAMS South RTT Family Medical Program.”

Dr. Erwin Rommel Espino, a second-year resident with UAMS South, said that there are nine residents in the program and each will spend a month with the SAU Athletic Training Department. He said he has appreciated the experience he has gained working with the SAU athletic training staff and students on maneuvers for sports injuries. His work at SAU has also helped him to be able to diagnose issues with joints, fractures and sprains.

“We are very appreciative to the people of Magnolia for being so friendly and welcoming,” said Espino, whose transition to Magnolia was evident by his blue Mulerider shirt he sported on the sideline of an SAU home football game. 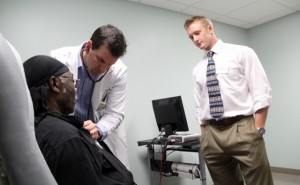 At the new UAMS South clinic in Magnolia, Matthew White is the first of many pre-health students to take advantage of shadowing the doctors. White, a junior from Rogers, Ark., plans to start applying for medical school soon and said the shadowing has been eye-opening.

“It’s been a great experience. I have gotten to learn about diagnosis, spend time talking to patients and doctors, and have seen what doctors do during a typical day,” said White, who was spending the afternoon after his classes with Dr. Gregory Backofen.

The clinic is going to work with one student at a time, each for a two-week period, according to Rebecka Wendling, community outreach coordinator at UAMS South. The end of October will conclude White’s shadowing experience, after which the next SAU pre-health shadowing candidate will be scheduled.

Wendling is also working with the SAU Pre-Health Club in scheduling UAMS South residents to speak to students interested in pursuing a career in health services. Just as White found his shadowing to be inspiring, Wendling and the SAU pre-health advisors hope hearing from working residents will motivate and inform other undergraduates.

“We are grateful to UAMS South for their openness and willingness to work closely to mentor our pre-health students. It has been a pleasure working with Rebecka Wendling, Dr. Martha Garrett-Shaver and Gloria Boone on this initiative,” said Dr. Viktoriya Street, associate professor of biology and a pre-health advisor at SAU. “Our pre-health programs at SAU have a tradition of getting students accepted into competitive programs of study for a number of health fields, and we know that this collaboration with UAMS South will continue to strengthen our pre-health program and students.”

a seven-county region that includes Ashley, Bradley, Calhoun, Columbia, Dallas, Ouachita and Union counties. The Center is affiliated with Magnolia Regional Medical Center and with the UAMS Medical Center and clinics. The clinic was previously located in El Dorado, Ark.

After SAU graduation in May, the numbers of pre-health students earning spots among competitive schools were again impressive: seven going into medical school, one into veterinarian school, one into physician assistant school, two into nuclear medicine, one into studying prosthetics, two into pharmacy school, one into dental hygiene, and two into graduate programs. To find out more about the offerings of the College of Science and Technology at SAU, visit www.SAUmag.edu/Science.