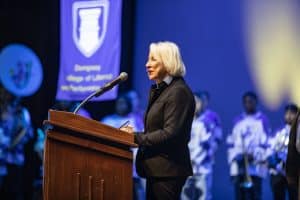 Joan Dempsey speaks to the SAU faculty and staff after the historic announcement.

Southern Arkansas University is delighted to announce that alumna Joan Dempsey and her husband, Jack Dempsey, are contributing a $1 million gift. In recognition of the significant commitment, the University has renamed the College of Liberal and Performing Arts as the Dempsey College of Liberal and Performing Arts. Proceeds from the endowment will provide ongoing annual support for the College through scholarships, classroom enrichment, travel, and faculty professional development.

The family’s SAU legacy began with Joan’s father, James A. Riddle, a 1961 graduate. Joan, a 1981 graduate, holds a bachelor’s degree in political science. In 2010, she received the SAU Distinguished Alumni Award. She and her husband, Jack, are included in the Mulerider Society, a giving society for the University’s most generous benefactors.

“On behalf of SAU, I want to express our deep appreciation and gratitude to Joan and Jack Dempsey for this generous, impactful gift,” said President Dr. Trey Berry. “The Dempsey College of Liberal and Performing Arts will continue SAU’s legacy of providing a well-rounded, quality, and affordable education to students while securing the importance of a liberal arts education. Again, we are deeply grateful.” 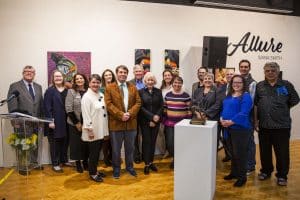 The Dempseys and faculty members of the newly renamed Dempsey College of Liberal and Performing Arts.

With 25 years of experience working in the federal government as well as leading in the private sector, Dempsey serves on four corporate boards and one advisory board. “That foundation was laid in Magnolia, Arkansas,” Dempsey said. “It never dawned on me in 1978, sitting in a political science class at SAU, that one day I’d be running a billion-dollar business in a private sector company or sitting on the board of 10 billion-dollar companies, helping them figure out how to grow and deal with business challenges like I do today.”

“Every dollar you invest in SAU has a ripple effect that creates opportunities far beyond just an individual student,” Dempsey said of the first contribution her family made, “It’s a way to give back to these communities that nurtured us growing up and are experiencing tough times. We are thrilled to be able to make this investment.”