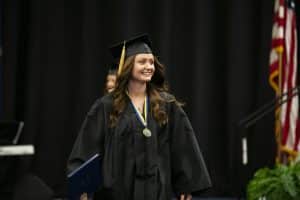 Southern Arkansas University will come together to honor over 500 fall 2022 graduates during three commencement ceremonies on Friday, December 9, in the W.T. Watson Athletic Center.

SAU’s 2022 honor professor, Japhet Makia, will deliver the fall 2022 undergraduate commencement address. Mr. Makia joined the SAU faculty in 1990 as an instructor of writing, a position he continues to fill with distinction as a teacher of both transitional and general education courses in composition and world literature for the Department of Modern Languages. Mr. Makia is also a published poet, biographer, and editor. He has had his writing published in a variety of literary journals and writing anthologies and has won several awards for his poetry and editing over the last 40 years. For example, he was awarded the 2003-2004 Legendary Editor Award at the University of Arkansas at Pine Bluff during the Arkansawyer (university newspaper) 75th Anniversary celebration.

The commencement address for the graduate ceremony will be delivered by David Downs, superintendent of Emerson-Taylor-Bradley School District in Arkansas. Throughout his career in education, Mr. Downs has said that he’s been fortunate to work with great people who have guided and mentored him. While he was the principal at Taylor High School, the school achieved an “A” status by the Division of Elementary and Secondary Education. Currently, of the six schools in the Emerson-Taylor-Bradley School District, four are rated as an “A.” This fall, Emerson Elementary School received national recognition as a “Blue Ribbon” status school by the U.S. Department of Education. In addition to these accomplishments, Mr. Downs was also inducted into the Southern Arkansas University Educational Leadership Hall of Fame in 2021.

Each ceremony should last approximately 60-90 minutes.  There will be no guest limits or tickets required for guests to attend the commencement ceremonies, and face coverings will be optional for all attendees (candidates and guests). The commencement ceremonies will be streamed live on the SAU Facebook page for those who wish to attend virtually.