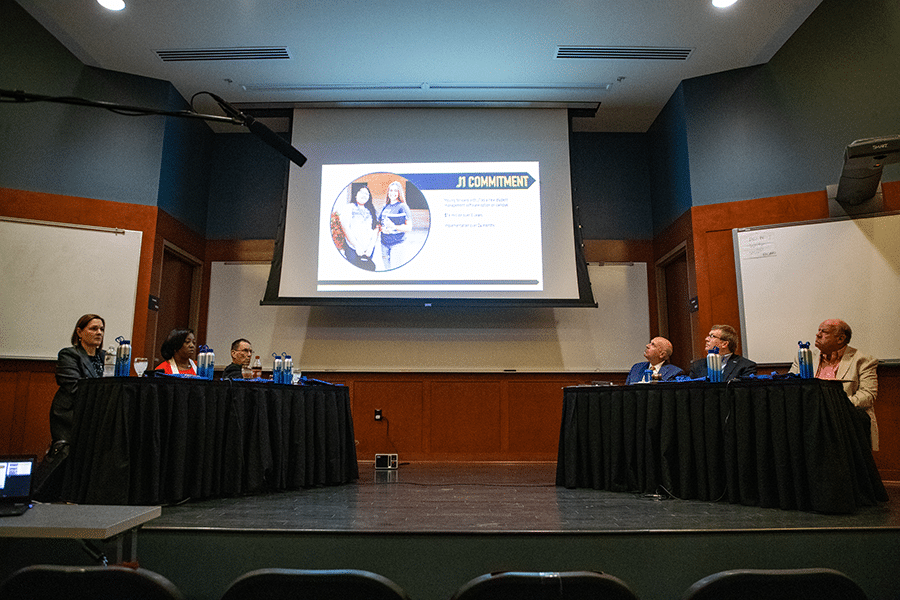 Achievements in academics, campus growth, and a drastic reduction in positive COVID cases were highlighted by Dr. Trey Berry, president of Southern Arkansas University, in his report to the SAU System Board of Trustees on Thursday, Oct. 28. The Board heard a variety of agenda items, including academic program changes and a resolution on social media policy.

Berry thanked SAU’s faculty and staff for coming together in a time of crisis to minimize positive COVID numbers. With a total campus population of 4,434 students, Berry said there are only three positive cases, all of which are off-campus. He reported no positive cases among faculty and staff. Since the beginning of the pandemic in 2020, there have been no positive transmission cases in SAU classrooms. “This has been nothing short of a miracle,” Berry said, again thanking both the SAU and SAU Tech campuses for their efforts in meeting the crisis.

Turning to enrollment, SAU did experience a downturn in undergraduates in fall 2021, which Berry noted was seen at universities across the country. However, SAU saw a significant increase of 25 percent in its graduate programs and an increase of two students in overall enrollment. “We are very fortunate,” Berry said, adding that spring graduate enrollment numbers are also showing positive signs of growth.

New academic programs are making a difference at SAU, including the new Healthcare Administration major offered by the Rankin College of Business. Berry said this major will be attractive to students. “We know the jobs in this industry are out there,” he told the Board.

The new Poultry Education Center is up and running, having received its first batch of chickens in early September. “If you want to study poultry science, we are one of two places in the state where you can do that,” Berry said. “We are excited to bring this tradition back to SAU.”

He informed trustees that the College of Education and Human Performance was selected for a Forward Arkansas grant of $100,000. Of 16 universities to apply for the grant, SAU was one of only eight to receive this grant, which will enhance or encourage people in the education field. Berry also said the University’s Game Design and Animation, Engineering, and Nursing programs are all going strong, offering attractive educational opportunities.

“All our majors across campus are doing well,” Berry said. “It is so good to see all this life come back to our academic programs.”

He excitedly told the Board that the recently-concluded Love and Loyalty Campaign exceeded its $22.275 million goal by 33 percent, raising an extraordinary $29.7 million in five years.

The campaign touched every area of campus, Berry said. Highlights include a $100,000 grant by the Roy and Christine Sturgis Charitable and Educational Trust of Arkadelphia that will provide the majority of funding needed to purchase new uniforms for the growing Mulerider Band. Bussey Hall was the recipient of a grant from the Arkansas Natural and Cultural Resources Council (ANCRC) to restore the historic building to its original “1950s grandeur,” said Berry. And, Giving Day, on Sept. 16, set a record number of gifts from generous donors.

SAU Athletics continues to shine, with Mulerider student-athletes giving back to the community in various meaningful ways. And, Berry said, SAU participated in hurricane recovery by delivering a trailer full of donated supplies to hard-hit Raceland, Louisiana.

Finally, Berry said the new indoor training facility, the Dawson Athletic Complex, will soon open on the north side of the campus adjacent to the football field. “It will be transformational for our students,” Berry enthused.

Dr. Jason Morrison, chancellor of SAU Tech, gave the Board an update that included the addition of a second instructor for Tech’s new sonogram program. “We’re very excited,” Morrison said of the program, which will be available in the fall of 2022. “It will be the only program like it south of Little Rock and the only one offered at any two-year college in the state. Inquiries have already been tremendous.”

SAU Tech has also received a grant for $1 million to improve its WiFi capabilities and make 31 classrooms synchronized, to increase distance learning.

Another grant received by Tech for $1.5 million will be used to provide workforce training for 600 new and current workers for all industries in the Ouachita County Industrial Park and six surrounding counties. “This is a great opportunity,” Morrison said, noting that Tech receiving two such grants in as little as six months is a significant achievement.

In other business, the Board approved academic program changes recommended by Dr. David Lanoue, SAU’s provost and vice president for Academic Affairs, and Dr. Valerie Wilson, SAU’s vice chancellor for Academics and Planning, as well as the 2020-21 Minority Recruitment and Retention reports for both institutions. The Board also approved a social media resolution/policy presented by Roger Giles, vice president of Administration, and a resolution authorizing the sale of real property. After a brief executive session, the Board approved personnel changes.

The meeting was then adjourned.