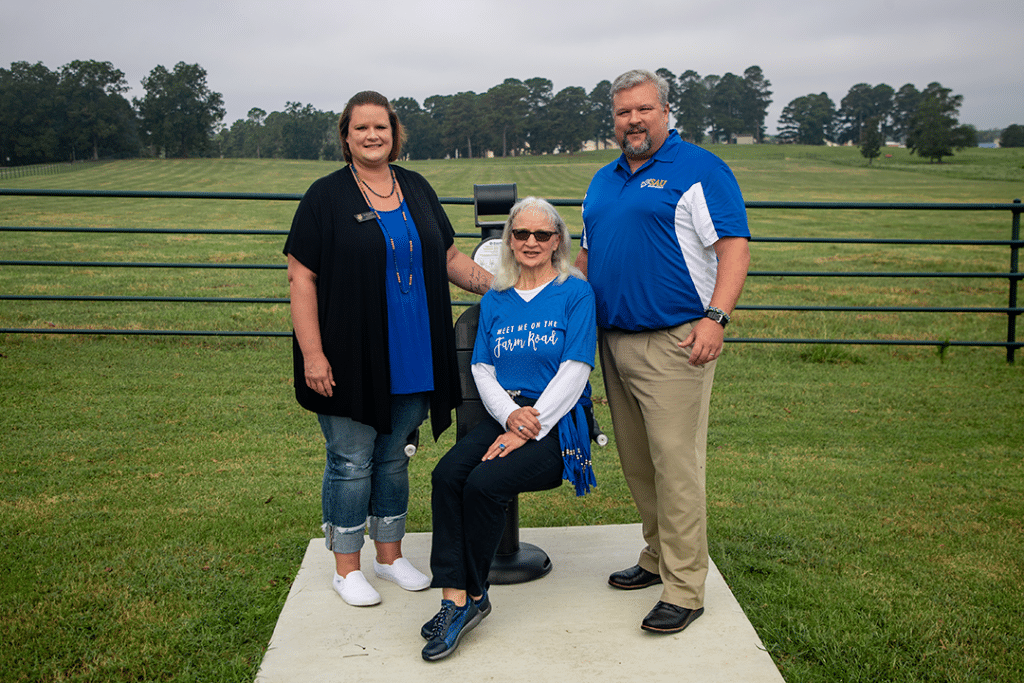 Bonnie Adcox (center) and her children Sarah and Joseph have given 12 exercise stations to SAU for installation along the Walking Trail in memory of Jay Adcox.

The Magnolia community as well as students and visitors to Southern Arkansas University can now enjoy new outdoor fitness equipment located on the SAU Walking Trail. Twelve fitness stations were given in memory of Jay Adcox by his wife, Bonnie Adcox, and their children, Joseph and Sarah Adcox. Coach Adcox spent 36 years teaching in Health, Kinesiology and Recreation (HKR) as well as coaching collegiate football.

“I have seen so many use the trail. It is a neat asset to the University and the community,” said Bonnie Adcox. “To honor Jay’s memory, we thought about what he would want to see on campus and decided this might be something the community could use as people are getting more outside exercise.”

“I am really excited to have this new outdoor fitness equipment that not only our SAU students, faculty, and staff can utilize but also our Magnolia community,” said Sarah Adcox, director of the Mulerider Activity Center. “I think it’s going to be such a great addition to promote healthy, active lifestyles on our campus. My dad has been gone 10 years. I miss his knowledge and presence on campus and how much he loved SAU. This equipment is a great way to remember him and how much he meant to us as a family, but also how much he meant to the countless lives he touched over the years.” She gave the project her expertise on the types of equipment that would be best to install along the trail.

Jay had a passion for teaching lifelong healthy habits to hundreds of students. In his 25 years at SAU (1986-2011), he served as assistant football coach, defensive coordinator, chair of the HKR department, and Director of Athletics. Coach “A” was a beloved figure on the SAU campus. He passed away in 2011.

“Jay was a coach, first and foremost,” Bonnie said. “He loved athletics and believed in HKR. When he didn’t feel good, he would walk the farm road.” Given his love for the trail, the Adcox family chose to honor his memory by placing exercise equipment all along the path for the benefit of the public.

“There are a variety of machines,” said Bonnie. Walkers can pause at any of the 12 stations for a workout.

Patrons can scan the QR code located on each machine for a video that will show how each piece of equipment can be properly used. Doggie stations are also available so that walkers can “curb” their four-legged companions while enjoying the machines. The equipment will be monitored and cleaned frequently by SAU.

“It’s going to be nice and neat and fun for the community,” enthused Bonnie.

Jay Adcox was a native of Snoqualmie, Wash., and married to Bonnie for more than 37 years. At the time of his passing, he was in his 34th year in higher education and intercollegiate athletics. He was influential in helping to lead the department of HKR as they planned and moved into the Kathryn Brown HKR Complex and developed new academic degree programs in Exercise Science and Athletic Training. He was instrumental in the renovation and upgrading of all athletic facilities at SAU, including the construction of SAU’s first on-campus women’s softball field, expansion and improvements at the Walker Stadium baseball complex, and improvements to the Auburn Smith Fieldhouse.