Thomason, producer of such hit television series as “Designing Women” and “Evening Shade,” regaled the audience with anecdotes from his life before signing copies of his book, Brother Dog: Southern Tales and Hollywood Adventures. The book is a collection of personal stories from Thomason’s childhood in Arkansas. 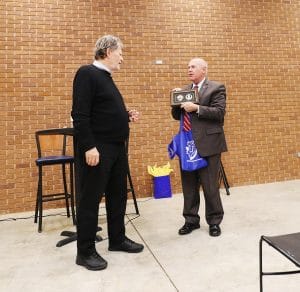 Harry Thomason, left, receives gifts from Dr. Trey Berry, president of SAU, at the conclusion of his presentation at the SAU Alumni Center on Nov. 4, 2019.

Dr. Trey Berry, president of SAU, introduced Thomason, calling him a “true Southerner” whose television shows entertained millions of Americans. Thomason graduated from Southern State College in 1962. His first productions were political commercials for statewide broadcast. He ultimately moved to California, where he began making made-for-TV movies and sitcoms. In 1983, he founded Mozark Productions with his writer-producer-director wife, Linda. Together they produced “Designing Women,” “Evening Shade,” and “Hearts Afire.”

Thomason got the audience laughing with several humorous tales of his time in Magnolia, then moved on to describe his efforts to bring stories set in the South to the screen. A common connection with one Hollywood executive to Thomason’s hometown of Hampton, Arkansas, helped him clear a crucial hurdle early in his career.

He spoke about helping fellow Arkansan Billy Bob Thornton take his career to the next level by giving the actor a role on “Evening Shade” that led to a larger role on “Hearts Afire.” He also recalled his friendship with Charles B. Pierce, the Arkansas-based director of The Town That Dreaded Sundown and The Legend of Boggy Creek. Thomason’s presentation concluded with a brief Q&A before moving inside for the reception and book signing.

Brother Dog may be purchased at the SAU Bookstore and SAU Beyond the Campus.