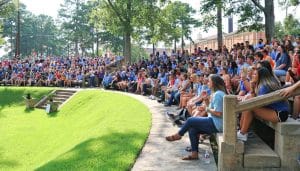 Another SAU enrollment record is the number of students choosing to live on campus at 1,950, which is up 100 students over last year’s record of 1,850.  Aramark Food Service is reporting a six percent increase in students on the meal plan from last fall as well.

“We are once again proud of our entire Mulerider family – faculty, staff, current students, alumni and friends,” said SAU President Dr. Trey Berry. “It’s been the commitment of everyone to foster our ‘culture of caring’ at SAU that has been the foundation to maintain this positive enrollment trend for our University.”

Because of the beautiful and welcoming campus at SAU, we feel that if we can get students to visit us, then they will understand first hand why so many students are choosing SAU

Over and over again, incoming freshman reported that SAU “felt like home” with a “warm and caring environment.” This is why a goal of SAU’s Enrollment Services is to have high school and other potential students visit SAU for a personal tour of campus. 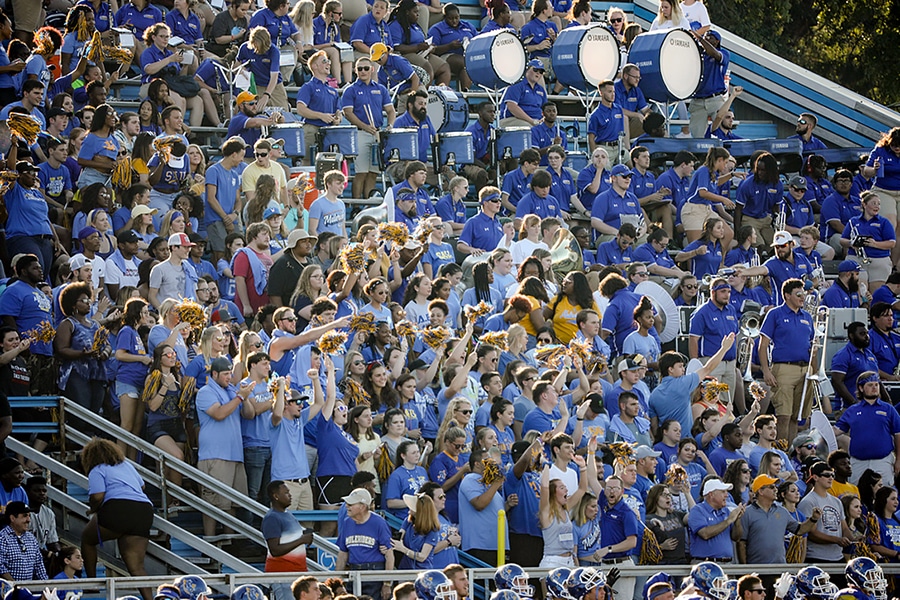 The student and band sections at the first Mulerider Football game were packed as SAU defeated Arkansas Tech at Wilkins Stadium in Magnolia on August 30.

“Because of the beautiful and welcoming campus at SAU, we feel that if we can get students to visit us, then they will understand first hand why so many students are choosing SAU,” said Sarah Jennings, assistant vice president of enrollment services. “We had a record number of tours and group visits last year, up 18 percent from 2017-18, so we are not surprised by our record freshman class and record on-campus enrollment this fall.”

Along with continued enrollment records, there have also been parallel expansions and improvements of other important components of SAU. As of fall of 2019, SAU will have added five new residence halls and purchased an apartment complex since 2016. The most recent addition, Arkansas Hall, is currently under construction and will increase University Housing’s capacity by 132 beds. The cafeteria at SAU was expanded for last fall’s growth. This fall a Panda Express is being added to the other popular dining options on campus, including Chick-fil-A, Subway, Java City and Grille Works. 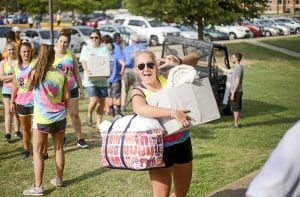 Southern Arkansas University came to life on August 19 during move-in day with a record number of students choosing to live on campus and numerous campus and community groups on hand volunteering to help students get moved in.

In fall 2014, SAU established the only Engineering program in Arkansas south of Little Rock. This program was built on strong support from regional industry and has continued to grow up to 220 Engineering majors this fall. A year before Engineering, SAU started the first Computer Game and Animation Design program in the state. Other popular new programs include Cyber Security; a unique SAU System program, Welding Engineering Technology; and a new track in the Master of Business Administration and Master of Public Administration for Social Entrepreneurship, the process of pursuing business-led solutions to achieve social aims and the reinvestment of surplus for community benefit.

Another new program at SAU starting this fall that has been established in response to national trends is the Bachelor of Science in Public Health. From disaster relief to disease intervention, public health promotes and protects the health of people and the communities where they live, learn, work and play. That can mean vaccinating children and adults to prevent the spread of illness or educating people about the risks of alcohol and tobacco. Public health also sets safety standards to protect workers and develops school nutrition programs to ensure kids have access to healthy food. The SAU Public Health program will focus on improving and protecting community health and well-being, with an emphasis on disease prevention.

We are excited to unveil Healthy U this fall, which is a culmination of services and offerings at the aim of helping our students be successful and enjoy their college experience

Along with facility and academic improvements, student success and well-being are constant areas of emphasis at SAU.  “We are excited to unveil Healthy U this fall, which is a culmination of services and offerings at the aim of helping our students be successful and enjoy their college experience,” said Dr. Donna Allen, vice president for student affairs.

The new Mule Rides bike sharing system at SAU is an example of a Healthy U initiative, as are the new sand volleyball courts and the 18-hole disc golf course on campus. The Counseling Center, which was expanded prior to this fall and has added two licensed counselors, is a part of the program as well, as is the addition of an additional nurse practitioner in University Health Services. Finally, the vast community involvement efforts that are at the heart of SAU’s complete college experience are also incorporated into Healthy U.

Berry also gives credit to Mulerider Athletic programs, which shined in 2017-18, for being strong representatives of SAU’s commitment to quality and professionalism. SAU Softball earned its most-winning season in program history and finished as one of the top three teams in the nation. Mulerider Baseball and SAU Men’s Track & Field won their respective GAC Conference Championships. The brightest moment for Mulerider Athletics, perhaps, came when more than 300 SAU student-athletes, coaches and administrators raised money for and gathered to provide a Make-A-Wish® Reveal fitting of a princess to Reagan, a seven­­-year-old girl from Fouke, Ark.