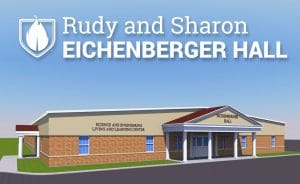 The Southern Arkansas University Board of Trustees voted unanimously on Thursday to adopt a resolution naming a new residence hall for science and engineering majors after Dr. Rudolph and Mrs. Sharon Eichenberger.

Rudy and Sharon Eichenberger Hall will house about 78 students as the Science and Engineering Living and Learning Center. Work has already begun to transform this facility, which was the former skating rink on campus near the Engineering Building, into one of two new residence halls slated to open for this upcoming fall semester.

Dr. Trey Berry, president of SAU, read the resolution prior to the board’s vote.

“Each of the Eichenbergers worked here many years and made a tremendous impact,” Berry said.

Dr. Rudy Eichenberger joined SAU in 1981. He was named professor of physics and chair of the department in April 1988 and retired in June 2007. He received a grant for $11,690 from the Arkansas Department of Higher Education to support the Integrated Science, Math & Technology project in November 1999. He was named professor emeritus on May 1, 2008.

The late Sharon Eichenberger started at SAU in 1983 and retired in 2002. She served as coordinator of annual giving and became director of development and executive director of the SAU Foundation, Inc., in 1984. She was certified as a fund-raising executive professional in 1989. 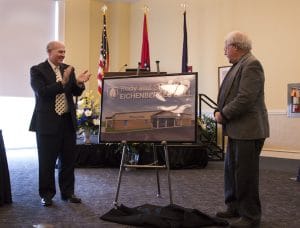 The Eichenbergers have been on the list of Top Five annual donors three times: 2010, 2012 and 2016. They have been generous supporters of Magale Library. They were among the top two donors to the Science Center, and Dr. Eichenberger made a leadership-level pledge to the Engineering Building.

In other business, the board, after discussion in executive session, voted unanimously to seek a resolution for $1.2 million to build the SAU president’s new home on campus.

Dr. David Lanoue, provost and vice president of academic affairs, presented the board with a slate of academic program changes, which were approved unanimously.

Lanoue recommended a new, five-year BS/MS Computer Science program that will allow students to complete their bachelors and master’s degrees on an accelerated basis and “start making a living.”

This new emphasis is the solution to that problem. Students can pursue their passion for art but gain the skills they need in business so they can manage their own career or perhaps someone else’s.

He also recommended a new emphasis to the BFA in Art and Design in Interactive Media and Marketing.

“Parents say, ‘Our child wants to major in art, but can they get a job?’ This new emphasis is the solution to that problem. Students can pursue their passion for art but gain the skills they need in business so they can manage their own career or perhaps someone else’s,” Lanoue said. “This will get them out in the job market and help them be successful.”

Lanoue said similar emphases will be added to musical theatre and creative writing, “marrying skills to passion. You don’t want to extinguish anyone’s enthusiasm but you do want them successful and employed.”

He and Berry also informed the board that a doctoral program in educational leadership is being considered for SAU. Such a program would make SAU the only university in the southern half of the state to offer such a program.

“There are few doctoral programs in education in the state,” Lanoue said. “That has consequences. None are below Little Rock. We need homegrown leaders who will serve our communities in southern Arkansas. We need to grow and deploy those leaders successfully.”

Such a program would have to be “consistent with our fundamental purpose and offer something unique to this area, that no one else offers,” Lanoue said.

It would likely emphasize rural education. “We think this would be attractive to students across the country and even around the world,” he said.

Courses recommended for modification were Marketing (to include retailing and sales), and Sports Management. Lanoue said the modifications would better “connect students with their career choices.”

Courses recommended for deletion were: BA in Behavioral and Social Sciences; BA in Mass Communication with an emphasis in Digital Cinema Media Production, and Criminal Justice Certificate of Proficiency.

“All three were simply not attracting enough students to remain viable,” Lanoue said.

In his report to trustees, Berry said spring enrollment has surpassed 2016’s enrollment. “We’re very happy about that; that’s not happening everywhere in the state,” he said of SAU’s growth.

SAU has a total enrollment of 4,343 students, an increase of 150 students over last spring. Graduate enrollment was down slightly, but Berry said he looks for that number to rise this fall.

“Applications are up, acceptance is up, campus tours are up, and our prospective graduate enrollment is up,” Berry reported. “The numbers are looking positive for the fall.”

He said he is optimistic about fall enrollment. “Applications are up, acceptance is up, campus tours are up, and our prospective graduate enrollment is up,” Berry reported. “The numbers are looking positive for the fall.”

However, “it’s not just about the numbers,” Berry said. He pointed to the recent accomplishment of Alycya Thomas, a junior theatre major from Jonesboro, Ark., who has been hired to work on the Broadway production of The Lion King: The Musical, this summer. “She is over-the-moon excited, and we are excited for her,” Berry said.

He also praised Morgan Morris, a student who will attend the Disney Leadership Academy in Orlando, Fla., next fall. “Almost never does Disney select a freshman for the Academy,” Berry said. “She is the exception.”

Berry looks forward to seeing this past year’s new course offerings continue to expand, such as cybersecurity (a growing field in which he said students will “be able to go right to work”),  and welding engineering technology.

Another new initiative that is expanding is SAU and Cuba’s Artemisia University collaborations.

“We are going forward with our relationship with Cuba,” Berry said, citing several faculty and student trips to the island nation. He said the president of Artemisia University will come to SAU in August to sign a formal agreement and SAU will reciprocate in February, establishing the first academic exchange between universities in Arkansas and Cuba.

Berry turned to athletic improvements on the campus, particularly the ongoing fund-raising campaign for a new football scoreboard. “The scoreboard was put up in 1967, it is 50 years old. We’re looking at one that will have a Jumbotron and we are halfway there in fund-raising. We hope to have this up by our first football game.”

He also said there are plans to build an Ag shop attached the Agriculture Center, and that the program plans to bring back swine production and poultry “for hands-on application.” Farm operations will also be relocated, he said, to near Story Arena.

Dr. Jason Morrison addressed the Board of Trustees for the first time as the new chancellor of Southern Arkansas University Tech. He began work on Jan. 3, 2017.

“It’s been a very quick two months,” he said. “We are putting ourselves in position to see growth for the fall. We have a plan for what we want the future to be.”

“Back in January, we held an executive retreat and we put together a plan for the coming year,” he said. “We wanted to put together a checklist of things we want to accomplish by the fall.”

Morrison said there will be a “complete review of all academic programs, to make sure they are in line with our local industrial needs and the requests from the students. We are in the process of moving to an RN program, which will be a tremendous boost to Tech’s enrollment and meet the needs of our area in nursing.”

He said Tech now has a goal of 350 new students “who were not here last fall – that’s up 111 over last year. We will be steadfast in growing our enrollment.”

SAU Tech is also seeking to expand “by 48 beds” by the fall, and will install solar panels to make residence halls more energy efficient and sustainable.

A new graphic arts instructor will be hired to meet student demand. “We are bringing that program back; it was highly desired by students,” he said.

Tech will also introduce a series of evening programs in downtown Camden geared toward non-traditional students. Courses on religion will be among those offered. They will be taught in eight-week blocks, which Morrison said will become more of the norm at SAU Tech.

“It is a true standalone virtual campus for online classes. We will see those classes in shorter segments, shorter blocks, that will appeal to any student who wants to receive an education.”

“We will be re-doing our schedule to fit more with non-traditional students. We’ll offer eight-week blocks so that students can see more accomplishments in shorter segments.”

Tech has also launched a virtual campus, Morrison said. “It is a true standalone virtual campus for online classes. We will see those classes in shorter segments, shorter blocks, that will appeal to any student who wants to receive an education.”

SAU Tech has also “completely revised its schedule,” he said. Classes were “recreated into a true block-scheduling format” to accommodate students’ needs. “Everything fits into a block. Classes are not competing against each other. It’s a work of art that we’ve done in a short amount of time.”

SAU Tech will also start a choir, he said. “We have a director in place and next week we have our first audition. The singing in Camden is fabulous, it’s amazing. It’s going to be tough to beat the choir we put out there.”

Small scholarships will help support the choir, he said.

SAU Tech will also start a scholars program to recruit “the best of the best. We want to be peoples’ first choice. We’re going to raise money to help them go to school to cover their residential expense, $500 per semester for their residential housing.” Leadership training would be included in the program.

Morrison said SAU Tech will also “bring back basketball” for the community to rally around. “Basketball is a good starting point for us and the community will connect with our institution.” The sport will also provide the opportunity for recruitment, he said.

SAU Tech Vice Chancellor David McLeane spoke about housing needs. He said Tech wants to increase its total capacity by constructing two new 24-person apartment units by fall of 2018. “We will have no problem filling those apartments,” he said.

He said he was seeking approval to enter a lease agreement with the SAU Tech Foundation for the construction of the two units, at an estimated cost of $1.7 million. The board approved his request.