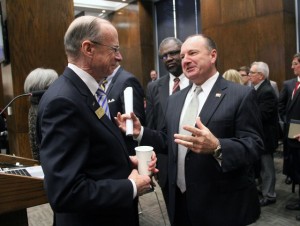 Southern Arkansas University was approved to establish a Bachelor of Science in Engineering program by the Arkansas Higher Education Coordinating Board quarterly meeting in Little Rock Friday, January 31, 2014.

“This is how higher education is going to grow. Being reflective of industry, and being reflective on the things that are available,” said Sarah Argue, chair of the Academic Committee of the Higher Education Coordinating Board. “I commend [SAU] and I commend your work. It is going to be a task, but thank you for committing to it and for committing to south Arkansas.”

The Bachelor of Science in Engineering at SAU will be effective Fall 2014. Projected starting enrollment for the fall semester is more than 20 students.

“This is a tremendous academic breakthrough not only for Southern Arkansas University, but for all of south Arkansas,” said Dr. David Rankin, SAU president. “This program will boost economic development in the region and offer our engineering students an opportunity to stay in the area after graduation.”

“There was a good group of industries from around the area that expressed without fail that [SAU’s engineering program] would benefit their company, and it would certainly benefit our company as well,” said Eric Williams, director of process technology at Albemarle Corporation’s Magnolia Plants. Albemarle is one of the world’s largest suppliers of bromine and bromine chemicals. More than 500 employees are employed at Magnolia’s two plant sites, according to the company website.

ADHE employed one engineering faculty member and two engineering program administrators to review the SAU engineering proposal. The team traveled to Magnolia to meet with area industry representatives, institutional administrators, and engineering physics students and faculty about the need for a bachelor’s degree in engineering. The reviewers also toured engineering labs and research science labs in the SAU Science Center and the Natural Resource Research Center on the SAU campus.

After meeting with the industry representatives, the reviewers concluded that there is a need for a general engineering degree in the south Arkansas region. The reviewers also confirmed that SAU has demonstrated its commitment to meeting the needs of area industry and the demands of students by offering selected courses in chemical and mechanical engineering as a part of the engineering physics degree, providing modern science laboratory facilities, engaging in collaborative research, and securing financial resources for additional engineering faculty, new engineering labs, and engineering program accreditation.

Sherrel Johnson, member of the Coordinating Board and resident of El Dorado, spoke to the need of an engineering program in south Arkansas. Johnson said that El Dorado Public Schools District Math Chair Thomas Simmons is excited about the opportunity of working toward a collaboration with SAU Engineering on the Cyberport project. Cyberport is an initiative that builds engineering interest in sixth and seventh grade students. 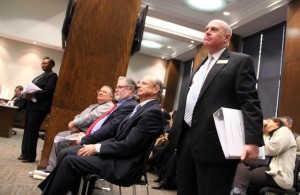 With this approval from the Coordinating Board, SAU will now focus on completing preparations for this new program. These preparations will include construction of engineering facilities near the SAU Science Center and the new Agriculture Center. WER Architects provided a study for SAU in September, which entailed outlines for a 11,015 square-foot construction project estimated at $2,753,580. [Download pdf of architectural renderings for new Engineering facilities at SAU].

“This is a great day for current and future students of SAU and south Arkansas,” said SAU Provost Dr. Trey Berry. “Friends of SAU also realize the gravity of this moment, and we will be talking to potential donors and partners shortly.”

Starting in the fall, SAU will have the only general engineering bachelor’s program south of Little Rock. Other Arkansas institutions currently offering engineering degrees include Arkansas State University, Arkansas Tech, University of Arkansas in Fayetteville and UALR.

”’L.A.’ is not ‘Lesser Arkansas,’ and it is not even ‘Lower Arkansas.’ It’s Arkansas,” said Coordinating Board member Kaneaster Hodges in reference to the positive effect he anticipates SAU’s Engineering Program having for economic development for south Arkansas.

New program offerings like engineering and the recent Computer Game and Animation Design and Wildlife Biology have helped enrollment jump at SAU to record numbers. For Fall 2013, SAU posted three enrollment records. The trend continued into this spring semester with a record spring enrollment for the University.

Along with SAU’s academic offerings and “complete college experience” on campus, SAU continues to serve as an economic engine for south Arkansas and the region. SAU is home to the Golden Triangle Economic Development Corporation. The University is also excited to be opening this spring the Story Regional Livestock and Rodeo Arena. The Story Arena will be more than home to SAU’s nationally-competitive rodeo team; it will also be available for a variety of events from concerts to trade shows. With a recent generous donation of $250,000 by Farmers Bank and Trust based in Magnolia, the reception facility at the Story Arena is expected to be first class.