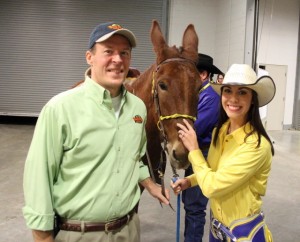 “The crowd loved having Molly there, and so did everybody backstage,” said Pederson.

Pederson’s winning performance featured the SAU Mulerider along with seven other Arkansas athletic mascots. He spoofed the 2013 viral music video “The Fox (What does the fox say?).”

Rusty Hayes walks Molly Ann through the back entrance to Verizon Arena.

When Pederson sang, “And the Mulerider rides…,” Mulerider Megan Maye walked atop Molly Ann between the stage on the Verizon floor and the VIP section. The Mulerider was met with an outburst of applause from the surprised crowd. Molly Ann navigated the 10-foot dark pathway to the welcome sight of Rusty Hayes, who was positioned on the opposite side of the stage.

The Mulerider walked across the crowd again at the end of the song, and provided an encore appearance for the final song of the night. Her appearance was highly anticipated by the organizers of the event, who added in a clause in their event insurance to allow a mule to be on the Verizon floor. 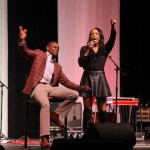 The Mulerider traveled more than ever throughout the fall semester as a part of the “Taking the Mulerider on the Road” campaign. This initiative celebrated SAU’s record fall enrollment and broadening reach across the region. The Mulerider made stops in Texarkana, Hot Springs and Little Rock.

To find out more about the Mulerider’s travels, visit www.SAUmag.edu/ontheroad. 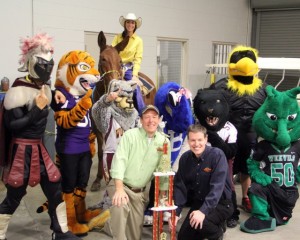