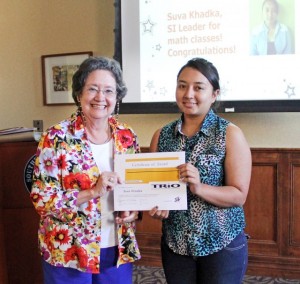 Shubhashree Khadka, right, receives the fall 2013 SI Scholarship certificate from Carolyn Terry. The scholarship is given to an exemplary SI student leader each semester in honor of Dr. Bob Terry, retired English professor, who created the SI program at SAU.

Shubhashree Khadka was recently announced as the fifth recipient of the Supplemental Instruction Scholarship at Southern Arkansas University.

This scholarship is awarded to an outstanding SI leader each semester in honor of Dr. Bob Terry, retired professor of English, who started the SAU SI program in the early 1990’s. Terry’s wife, Carolyn, was on hand to award the scholarship as her husband’s health restricted him from attending the event.

Khadka is a junior computer science major from Nepal. This is her third semester as an SI leader, and she currently serves transitional math classes.

“I am very glad to be able to help students with their math classes,” said Khadka. “To be honored for helping people with math is very special.”

Supplemental Instruction is a series of weekly group review sessions for students taking historically difficult courses. At each session students are guided through the class material by a SI leader, a competent student possessing at least an overall 3.0 GPA who has been recommended by the SAU faculty and who has previously made an A or B in the subject under that instructor.

Lavana Kindle, SI coordinator, gave an update on the SI program at SAU during the scholarship ceremony. She said that they have a dedicated group of 23 student SI leaders, which is down from as many as 35 leaders because of federal budget cuts. She said they are just trying to work smarter with the money they have. They even have two SI leaders who are volunteering their time.

She also had nothing but praise to say about Khadka, whom they call Suva.

“Suva is one of the sweetest, kindest students I have ever met,” said Kindle. “She bends over backwards to ensure that math students who come to her SI sessions understand important material individually before proceeding as a group. Suva has been known to go out of her way to assist students during times other than her advertised SI sessions.”