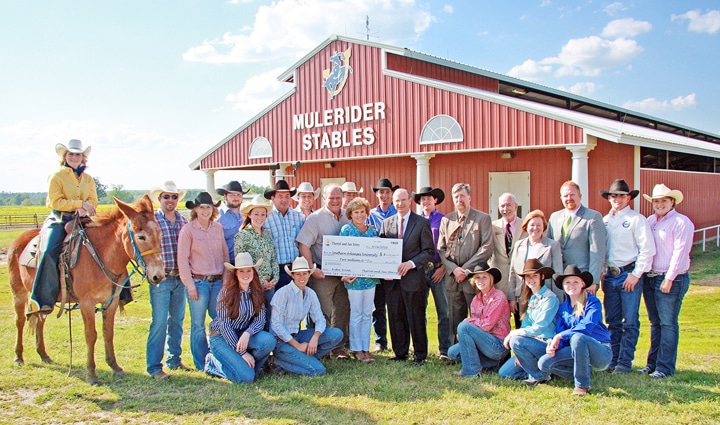 Therral and Jan Story, center, present a check for $2 million to Dr. David Rankin, the SAU rodeo team, and other administrators.

MAGNOLIA – Construction of a new rodeo arena at Southern Arkansas University is much closer to reality after a $2 million donation from Therral and Jan Story of Magnolia. The gift, made through the SAU Foundation, is the largest ever received by the University from an individual donor.

“Through their extraordinary generosity, Therral and Jan Story are making an investment in Southern Arkansas University that will impact both the students and programs on the SAU campus and the future of this region,” said Jeanie Bismark, executive director of the SAU Foundation. “On behalf of the Board of Governors of the SAU Foundation, we gratefully accept this, the largest gift from an individual in the history of the University. What a wonderful way to begin SAU’s second century of learning.”

The Storys presented a check to the SAU rodeo team and administrators on Wednesday, April 14. Therral Story said he appreciates the hard work demonstrated by the students on the rodeo team and is impressed by the fact the team is composed of students from across the nation. He hopes a new arena will only expand the team’s successes and bring more events to Magnolia.

“It’s hard to have a rodeo without an arena,” he said. “We thought it would be a good idea for the community and the growth of the University.”

As part of the University’s Blue and Gold Vision master plan, the proposed covered arena will be designed to meet the needs of SAU’s intercollegiate rodeo team. The facility will also be built to accommodate horse shows and other livestock events as well as concerts and trade shows. Feasibility studies are being conducted to determine the best location for the arena in the vicinity of the existing Mulerider Stables.

SAU President Dr. David Rankin said the arena will provide an excellent location for members of the nationally competitive SAU rodeo team to practice rain or shine. It will also help draw more visitors to the campus and Magnolia.

“We are very grateful to the Storys for their outstanding generosity,” said Rankin. “They are making the lead gift for a facility that will greatly benefit Southern Arkansas University and the local and regional economy.”

“Just getting students on campus to see what you’ve got is half the battle most of the time,” Hayes said. “This will help.”

While plans for the arena have not been finalized, University officials estimate its total cost will be $3.5 million and that it will be approximately 125,000 square feet covered. Parking will add an additional 12 acres to the site plan. The SAU Foundation will continue to raise private funds for the arena’s construction.