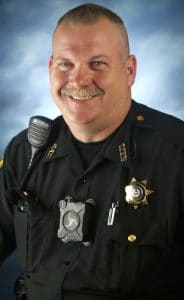 Corporal Rasberry began his law enforcement career with the Colombia County Sheriff’s Office in 1998 as a reserve deputy under Sheriff Calvin Knighton. In 2000 he was hired by the Magnolia Police Department as a patrolman and attended the Arkansas Law Enforcement academy. During his time with Magnolia he was promoted to the rank of Patrol Sergeant in 2007 and became a member of the Special Response team. In 2012 after attending the FBI swat school he became the team commander. In 2015 Corporal Rasberry came to work for SAU as a Public Safety Officer holding the rank of Corporal and serves as the departmental training officer. He is a certified law enforcement instructor, certified bicycle patrol officer and PADI certified rescue diver. Corporal Rasberry is married and has seven children.