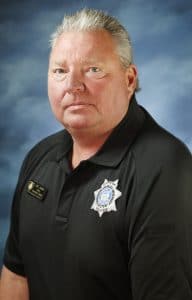 Chief Jester came to Southern Arkansas University in 1978 to play football. He graduated from SAU in 1984. His 35 year law enforcement career began as a Deputy Sheriff with the Columbia County Sheriff’s Office and 29 years with the Arkansas State Police, where he rose to the rank of Captain and was the Commander for Troop G. Jester came home in October of 2015 and became SAU’s Chief of Police. He and his wife Marcia have one son, Jeffrey (Emily) and two grandchildren, Hays and Margo.