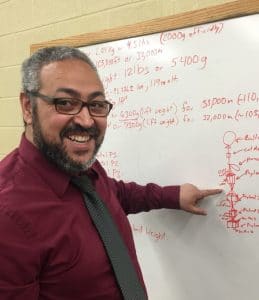 Professor of Physics / Dean of The College of Science and Engineering

College of Science & EngineeringEngineering and Physics

Dr. Abdel Bachri completed a B.S and an M.S. from the University of Hassan II, Casablanca, Morocco, where he majored in Physics. He also received a Master’s Degree in High Energy Physics from the International Center of Theoretical Physics, in Trieste, Italy, and a Ph.D. in Theoretical Particle Physics from Oklahoma State University in 2007. Dr. Bachri’s main research revolved around the study, via theoretical modeling, of matter-antimatter asymmetry in the universe and the mechanism of Baryogenesis. Dr. Bachri joined SAU in 2007; since then he has taken an in interest in experimental particle physics. He served as fellow scientist at Lawrence Berkeley National Laboratory, during which time he was involved with the effort to observe neutrinoless double beta decay using a high-pressure xenon time projection chamber. More recently, Dr. Bachri developed an interest in the field of radiation biology and has since been awarded an NIH-INBRE Research Development Grant for $265,000 to explore the effect of space radiation in a near-zero gravity environment on astronauts. Dr. Bachri currently serves as Professor of Physics and Dean of the College of Science and Engineering. Dr. Bachri’s favorite activity with students is probing Earth’s stratosphere via high altitude scientific ballooning. He has led students on a number of ballooning experiments funded by NASA and has flown several payloads.