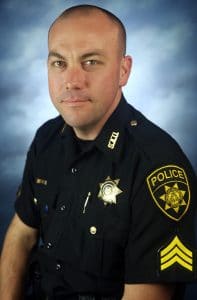 Sergeant Derek Avery began his career in law enforcement in 2001 as a dispatcher with the Magnolia Police Department. After attending the Arkansas Law Enforcement Training Academy in 2005, he spent three years with the city’s patrol division before returning to SAU and joining the University Police Department in 2008. Here he holds the rank of sergeant and supervises the agency’s patrol division. Sergeant Avery is a lifelong resident of Magnolia and holds a Bachelor of Science degree in criminal justice and a master’s degree in public administration, both from SAU. In his spare time he enjoys being outdoors and is an avid hunter and guitarist.