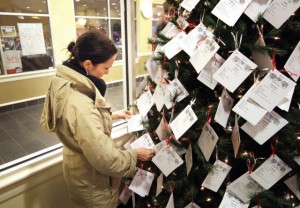 Caroline Waller selects three angels from the Columbia County Angel Tree Friday at the SAU Reynolds Center Community Services office. Waller said the she and her husband adopt angels from the tree every year. She got three Friday – one for her father and two for her family – and she already had adopted five through her association with the Magnolia Junior Charity League.

More than 700 youth in Columbia County will have a happier holiday thanks to the Angel Tree at Southern Arkansas University.

The Angel Tree serves children in need from infancy through high school seniors by providing sponsors with information about each child’s age, gender, sizes and gift requests.

It also serves as an economic engine to the local economy. Even conservative estimates suggest that sponsors donate more than $40,000 in clothing, toys and electronics every year.

The Angel Tree and volunteers are located in the Reynolds Center Community Services office. It will be open 8 a.m. to 5 p.m. Monday and Tuesday of Thanksgiving week for those planning to go Black Friday shopping. It will reopen from December 2-6 at 8 a.m. to 5 p.m. daily.

Visitors to campus for the Celebration of Lights on December 5 will also be able to take a moment to sponsor angels in the Community Services office.

Since 2008, the Angel Tree at SAU has been co-coordinated by two student organizations – Lambda Alpha Beta (the Chemistry Club) and Sigma Tau Delta (the English Honor Society).

For several years prior to 2008, the Magnolia Housing Authority coordinated the county’s Angel Tree efforts. Many SAU students volunteered each year, but the sponsor of Sigma Tau Delta, Dr. Shannin Schroeder, had taken a lead role in helping to create a database of angel information. 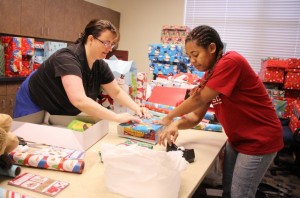 Dr. Shannin Schroeder, left, works with a student volunteer in December 2012 wrapping donated Angel Tree gifts. Schroeder and her husband, Dr. Tim Schroeder, helped transition the Angel Tree to SAU in 2008 and continue to be driving forces behind its continued service to Columbia County.

When the project outgrew the Housing Authority, Schroeder and her husband, Dr. Tim Schroeder, were approached to ensure that the Angel Tree would continue operating. The Schroeders, both SAU professors, asked for and received permanent commitments from the student organizations they sponsor at SAU to make sure the Columbia County Angel Tree did not fail.

“The year before the Angel Tree moved from the Housing Authority to SAU, the Angel Tree served 144 children. With increased visibility and the tireless assistance of the Department of Human Services in Magnolia, that number more than doubled after the move,” said Shannin Schroeder. “And the number continued to climb each year, peaking at 900 children in 2011 after global economic crises came home to roost in Arkansas.”

Schroeder said that the project would not be able to meet the needs of so many children were it not for the help of numerous individuals and organizations. In particular, Magnolia Junior Charity League’s willingness to collaborate with the Angel Tree has ensured that no angel goes without at least some Christmas gifts.

“The Magnolia Junior Charity League increased the already staggering number of children its members will shop for this year, adopting nearly 15% of the angels,” said Schroeder.

She added that they still rely on individual community members, as well as churches, Greek, academic and social student organizations, to help ensure that the remaining angels receive Christmas gifts each year.

The recommended spending range for each angel is between $50 and $70 per child. Gift wrapping is optional. Donations to the Angel Tree are also always welcomed.

“Sponsors should also know that children or parents may ask for expensive items because they see their friends and classmates with those items, but that any gift is appreciated and makes Christmas more exciting for the neediest among us,” said Schroeder.

Schroeder has a host of heartwarming stories from her years working with the Angel Tree. She has realized that the “sponsors are angels, too.”

“A couple of years ago, when we had so many children on the tree, one little girl’s mother brought her to the tree to look for an angel to sponsor. While she looked, her mother told me the little girl had asked not to receive presents for her birthday, because she had decided she was lucky; she had lots of toys. Instead, she asked her parents to put that money toward sponsoring an angel,” said Schroeder.

This year, anyone interested in volunteering with the Angel Tree can utilize a convenient web form. For more information about the Angel Tree, call 870-235-5186.