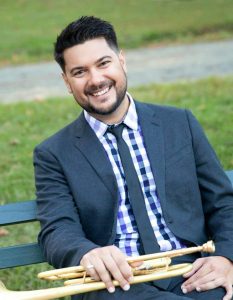 Mr. David D. Torres, serves as Assistant Professor of Trumpet & Horn and Director of Athletic Bands at Southern Arkansas University. A renowned performer, educator, and arranger, prior to his appointment at SAU, Mr. Torres enjoyed a multifaceted career as a professional musician. Based in both New York and Florida, Mr. Torres’ Broadway tour credits include; Disney’s Beauty and the Beast, The Drowsy Chaperone, The Bodyguard: The Musical (PaperMill Playhouse & 1st Nat’l), The Producers, and Andrew Lloyd Webber’s The Wizard of Oz. Credits also include 5 years with the Broadway production “Blast!” And “BLAST II M.I.X.” as trumpet soloist with both the Japanese and North American tours. In addition, Mr. Torres was one of the last trumpet/conductors to lead the live band for the famed Ringling Brothers and Barnum & Bailey Circus. He served for four years as Ringling’s trumpet player and assistant musical conductor for the 142nd and 144th Edition of “The Greatest Show on Earth.” While in Florida, Mr. Torres got his start playing trumpet at Walt Disney World, and he is a proud Alumni of Disneyland All-American College Band (2004). In Southwest Arkansas, Mr. Torres can be heard as a regular or sub musician with the Texarkana Symphony Orchestra, Texarkana Jazz Orchestra, British Brass Band Association of Louisiana, and Ouro Boar. Prior to moving to Arkansas, Mr. Torres has also been associated with the Tampa Bay Symphony, Las Cruces Symphony Orchestra, Paso Del Norte Big Band, Organ Mountain Brass, Tampa Brass, NYGASP (NYC Gilbert and Sullivan Players), David Rowen Creative, PaperMill Playhouse (Tony-Award Winner), and Suman Entertainment (NCL).

As a conductor and band director, Mr. Torres is an in-demand private instructor, arranger, adjudicator, and lecturer throughout the country. He has given masterclasses and lectures for numerous high schools, universities, and music festivals including the Arkansas School Band and Orchestra Association, Four States Bandmasters Association, and the International Trumpet Guild. The Marching Mulerider Band (M.M.B.) has grown into one of the largest collegiate marching bands in the state of Arkansas. The M.M.B. performs no less than 2 shows at each home game; one traditional pregame show and a modern halftime show of original music and drill designs specifically written for the group. The M.M.B. regularly travels through the region, performing in exhibition and at invitationals in Louisiana, Texas, and Arkansas. The RiderSound Basketball “pep” Band was formed in 2019 and has become a staple at all Mulerider home basketball games, rocking the W.T. Watson Center. This group of 30-50 players play original arrangements, while donning SAU hockey-style jerseys.

Mr. Torres is an endorsing artist of B.A.C. Custom Musical Instruments, Hercules Stands, and ChopSaver lip balm. He lives in Magnolia, Arkansas with his loving wife Anna, and their dog Lola.