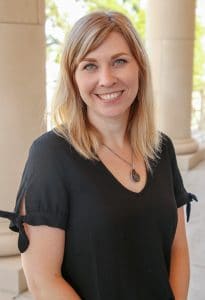 Abby D’Ambrosia is a paleoecologist, paleoclimatologist and the Marine Biology program advisor at SAU. She received a B.A. in Geology from Smith College (2007), an M.S. in Geology (2012) and a Ph.D. in Earth and Environmental Science (2018) from the University of New Hampshire. Her research has examined paleontological, stable isotope, and geological evidence recording a series of extreme global warming events that took place during the early Eocene Epoch ( ~55 million years ago). She has experience teaching courses in global environmental change, sedimentology, stratigraphy and marine geology at a number of universities, including University of New Hampshire, Boston College, and Amherst College. Now at SAU, Dr. D’Ambrosia’s research uses fossil evidence to study climate-ecosystem interactions to investigate the impacts of climate change events on ancient animals and ecosystems. In particular, Dr. D’Ambrosia’s research interests at SAU will include local marine paleoecology, where she will study the impacts of global climatic shifts on the marine realm of ancient Arkansas throughout the Paleogene Period (~66 to 34 million years ago). At SAU, she teaches Principles of Biology I, Marine Biology, Oceanography, Marine Geology, Paleobiology, and Global Environmental Change.